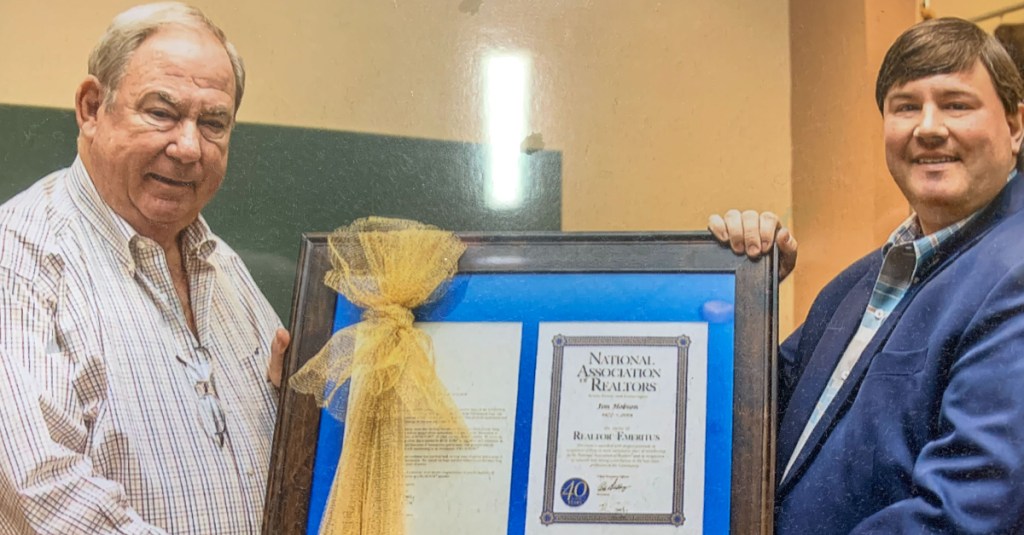 To hear his friends and colleagues describe him, James Daniel “Jim” Hobson Jr. was larger-than-life and a major player in not only the local real estate market but also across the state of Mississippi.

Hobson died Monday morning at the age of 75, survived by his wife of 53 years, Kay Varner Hobson, as well as his two sons and four grandchildren. He also leaves behind a lasting legacy and a career that changed the face and policy of Mississippi real estate for good.

“He was a legend. He’s the reason we have the real estate exam in the state of Mississippi,” said Jill Bishop, Association Executive for the Vicksburg Warren County Board of Realtors. “He was the state president in 1993 for the Mississippi Association of Realtors, and he sat on the MLS, or Multiple Listing Services, Committee for years and years.

One Vicksburg resident who learned the business from Hobson is now-Ward 2 Alderman Alex Monsour. Prior to his turn as a state representative and alderman at the local level, Monsour was a realtor with Varner Real Estate.

When he made the decision to go into politics, Monsour said one of his biggest supporters was Hobson.

“Jim was a unique individual. If he told you something, you could count on it,” Monsour said. “When I decided to go into politics, I told him I was giving up my (real estate) license. I didn’t want anyone to think, for any reason (there was bias). He understood it and told me he respected me for doing that.

“He became a really good friend of mine.”

Hobson’s career in real estate started in January 1974, when he worked as the Administrator and Chief Investigator of the Mississippi Real Estate Commission in Jackson. During this time, he oversaw the redesign of the broker’s license exam and the state salesperson license exam.

Both exams were rewritten to bring materials up to date and to provide a higher degree of real estate knowledge to pass the exams, with a goal of producing more knowledgeable and professional realtor associates and brokers in Mississippi. During his time at the commission, Hobson also worked alongside the late Harry Joachim to advance a bill in the state legislature to have the real estate license law amended to include for the first time ever continuing education requirements for licensees.

Hobson, a Memphis native, made Jackson his home for many years before settling in Vicksburg and joining Varner Real Estate with his father-in-law, the late Joe Varner, in 1977.

Ten years later, Hobson served as the State President of the Mississippi Association of Realtors. While serving as President, he worked closely with other Realtors to help begin the process of building an office building for the Mississippi Association of Realtors. The organization still occupies that building, which was opened and dedicated in 1995.

Hobson was described by his friends as an everyman, in the sense that he wasn’t exclusively comfortable behind a desk; instead, he preferred to get into the thick of the property building process. Paul Campbell, a business partner of 30 years in the homebuilding arm of Hobson’s business, said his friend was responsible for the construction of more than 500 homes in the Vicksburg and Warren County area.

“We did a bunch of residential subdivisions around town — Acadia Hills, Acadia Ridge, Falcon Ridge and the Quarters off of Fisher Ferry Road,” Campbell said. “He was a real go-getter and a hard worker.”

Campbell said he believes Hobson’s work in the local real estate market was equally impactful as his work at the state level.

“He was well-rounded and very intellectual when it comes to anything real estate. He will be sorely missed,” Campbell said. “He was involved in every aspect of the real estate industry and I learned a lot from him over the years.”

Hobson was a mover and shaker in the real estate market, said John Kammon, former owner of Glenwood Funeral Home. A lifelong friend of Hobson’s — their wives grew up as next-door neighbors — Kammon said he’d rarely seen someone so passionate about their line of work.

Vicksburgers today know Glenwood as the funeral home on U.S. 80, but that location wouldn’t have been possible without Hobson’s doing. When approached by a funeral service that wanted to move to Vicksburg, Hobson had the bright idea to sell the former Glenwood Funeral Home and build a new one for Kammon’s business.

“Jim called me one day and said, ‘You need to sell the funeral home.’ I told him, ‘I can’t do that; I’d have to get a real job,'” Kammon said. “And he says he has a man from Jackson who wants to come to Vicksburg and open a funeral home. This was Lakeview Funeral Home.

“If Jim hadn’t come around, we wouldn’t have (sold the building to Lakeview and) he wouldn’t have built the new building, where the funeral home is still located today.”

A memorial service for Hobson will take place on Thursday at Glenwood Funeral Home, with visitation beginning at 10 a.m. and the funeral following at 11 a.m.

Hobson’s son, Jay, said he will remember his father for his influence and love. He also said he’d like to thank the community for their support of his family.

“I had the opportunity to work alongside my father and learn how important it is to treat each client with the utmost respect and to do the job correct and to the best of your ability each and every time,” Jay said. “On behalf of my dad, I know he would want to say thank you to each and every client and business partner who put their trust in him during his 50 years in business. He lived his life to the fullest and never missed an opportunity to enjoy life. We praise the Lord for that.”