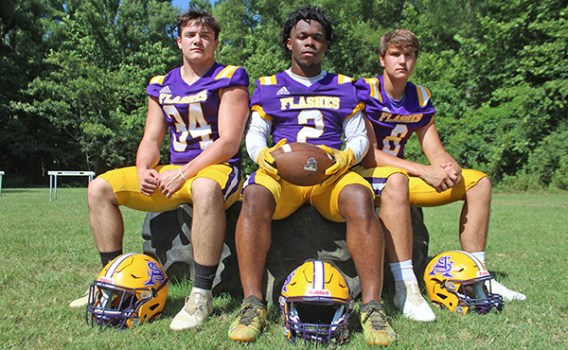 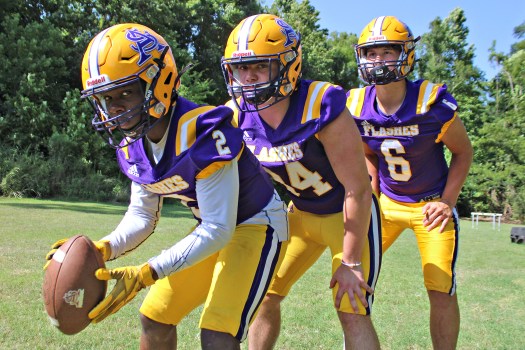 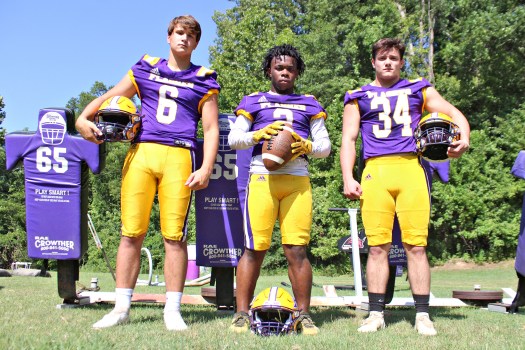 Editor’s note: This story appears in the 2022 edition of “Playmakers,” The Vicksburg Post’s annual football preview magazine. “Playmakers” will be included in The Post’s weekend print edition on Aug. 20, and will also be available at the newspaper’s office at 1106 Washington St. in downtown Vicksburg.

With their mix of power and speed, St. Aloysius football coach Bubba Nettles broke out the often-used description “thunder and lightning” for his running backs Damien Reeves and Padre Gray.

But what, then, does that make sophomore Thompson Fortenberry?

“He would be the hurricane,” Nettles said with a booming laugh. “He’s the Mack truck barreling down the highway.”

With so many forces of nature at work, the Flashes’ three-man running back rotation certainly has the potential to wreak havoc on opposing defenses. Each one is capable of carrying the load in a given week, and together they are quite a formidable unit.

“We have a monster of a backfield with Padre, Thompson and Damien. I’m looking forward to that,” Nettles said.

Like with any group, each member brings something special to the table. Gray led the team with 900 rushing yards and nine touchdowns during a breakout season in 2021.

Reeves had 98 yards in a win over Clinton Christian, and rushed for 112 yards on only four carries in the spring game against Central Hinds. Among his spring game carries were an 80-yard touchdown.

Fortenberry saw less playing time as a freshman, but still started one game and had some highlights. He’ll play a much bigger role this season.

Besides their football talents, they all agree that their key to success is a willingness to sacrifice for each other and the good of the team. Reeves, for example, said his favorite game last season wasn’t against Clinton Christian. It was against Riverfield, when he didn’t have any carries but served as a punishing lead blocker.

“Riverfield, even though I didn’t touch the ball one time, blocking for them it was insanely fun to hit people and watch them fall,” he said. “It’s just fun hitting people. It’s always been that way with me. I switched from offensive line to defensive line, to fullback and linebacker, so it’s always been with me.”

After hearing that, Gray laughed and said, “He’s such a good teammate.”

Reeves was a versatile, jack-of-all-trades running back for St. Al last season. He had plenty of highlights of his own, but also proved his worth as a blocker and occasional receiver out of the backfield. At the team’s awards banquet, he received the Most Outstanding Back award.

“You have to respect him running, blocking, and on pass routes. He can catch. If you’re keying on him, you’re not keying on Padre or (receiver) Ahmad (Stewart) and it’s opening things up for them,” Nettles said. “He’s one of the big leaders on defense. He’s just an unbelievable kid, too. There’s not enough wonderful adjectives in the English language to describe Damien Reeves. He is the All-American kid.”

Nettles had similar high praise for Gray, a senior leader with a vibrant personality and million dollar smile. It’s the smile, Nettles joked, that is his biggest problem with Gray.

“Padre has always got a smile on his face. It drives me nuts,” Nettles laughed. “We could be running 75s or 100s (sprints) and Padre has a smile on his face. I’m trying to run these guys and he’s Mr. Positivity. As a leader in the huddle, that’s what you want. Game on the line, you don’t want somebody saying it’s not going to happen.”

Gray comes from a long line of talented football players. His father Padre Gray Sr. and uncles Phelan, Vance and Patrick Gray were all stars at Vicksburg High in the 1990s and early 2000s. Making his own name in the sport and carrying on the family tradition comes with a sense of pride, Padre said.

“It means a lot to me, knowing my dad and his brothers were hardcore running backs. It feels good to live up to the family name and have that reputation and that name on the back of my jersey,” Padre said.

Like Reeves, Gray is also willing to sacrifice his own numbers for the good of the team. He said he’s just as happy to see Reeves or Fortenberry get a carry or a touchdown as himself, and deflected credit for his big 2021 season to his offensive line.

The sophomore Fortenberry, meanwhile, is the quiet one of the bunch. While Reeves and Gray answered questions and ribbed on each other, the self-described short-yardage specialist sat quietly to the side and seemed content to cede the stage to his older teammates.

Nettles said it was part of what makes this unit so special.

“They all mesh together pretty well. We have instilled in these kids that we’re a family,” Nettles said. “There is not a lot of egos right now, and that’s huge.”

Gray backed up that thought, saying the group has a similar mindset to succeed and turn St. Al’s program around. The Flashes have only had a winning record once since 2014.

“We never really look at it like that,” he said of each player getting their share of the carries. “We look at it as we’re the same person and brothers on and off the field.”