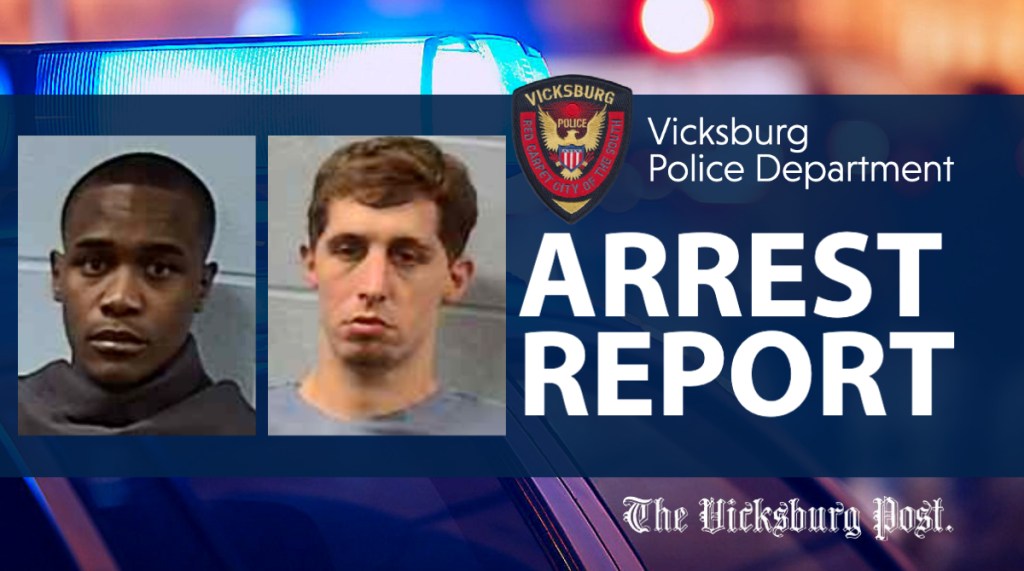 The Vicksburg Police Department made two arrests on Monday, one for aggravated assault and burglary of a dwelling, the other for receiving stolen property.

Between Thursday and Saturday, the Department also received a report of a possible burglary of a home in which it appears the suspects went for a swim in the backyard pool. Multiple reports of handguns stolen from unlocked vehicles were also taken.

One arrested for aggravated assault, burglary

Quinderion Mixon, 24 of Vicksburg, was arrested on Monday in connection with a residential burglary and shooting that occurred at the Beechwood Park Apartments at 201 Berryman Road on July 4.

Mixon is charged with burglary of a dwelling and aggravated assault. He is currently being held without bond until he makes his initial appearance in Vicksburg Municipal Court.

One in custody for receiving stolen cell phone

John-Taylor Burton, 31 of Vicksburg, was arrested Monday on a charge of receiving stolen property related to the theft of a cellphone at Home Depot on July 19.

Burton is currently being held without bond until he appears in Vicksburg Municipal Court.

Intruders go for a swim, possibly leave a dog at unlocked home

Officers responded to an address in the 1500 block of Chambers Street in reference to a possible burglary in progress on Saturday at 8:06 p.m.

The officers discovered a trail of water leading into the house from the back door, three floats from the pool house in the swimming pool, and a mixed-breed dog in the backyard.

The back door had been left unlocked. The case is currently under investigation.

On Friday at 11 a.m., officers took a report of an auto burglary that occurred in the 1400 block of Harrison Street.

The victim reported that someone had entered a 2018 Toyota Camry and stole a Glock 31 handgun. The vehicle was unlocked. The case is currently under investigation.

On Friday at 3:12 p.m., officers took a report of an auto burglary that occurred on Yazoo Street.

According to the victim, someone entered a 2013 Chevrolet Silverado and took a .380 caliber handgun and approximately $40. The vehicle had been left unlocked. The case is currently under investigation.

On Friday at 7:14 p.m., officers responded to the Bazinsky Ball Park, 220 Bazinsky Road in reference to a theft from a motor vehicle.

The victim stated that someone removed a wallet from the center console of a 2021 Toyota Corolla. The vehicle was unlocked. The case is currently under investigation.

Officers responded to the AmeriCorps campus at 2715 Confederate Avenue in reference to a stolen catalytic converter last Thursday at 9:39 a.m.

The complainant reported that sometime overnight, an unknown person entered the fenced-in area of the parking lot and cut a catalytic converter from underneath a 2015 Chevrolet van. The case is currently under investigation.