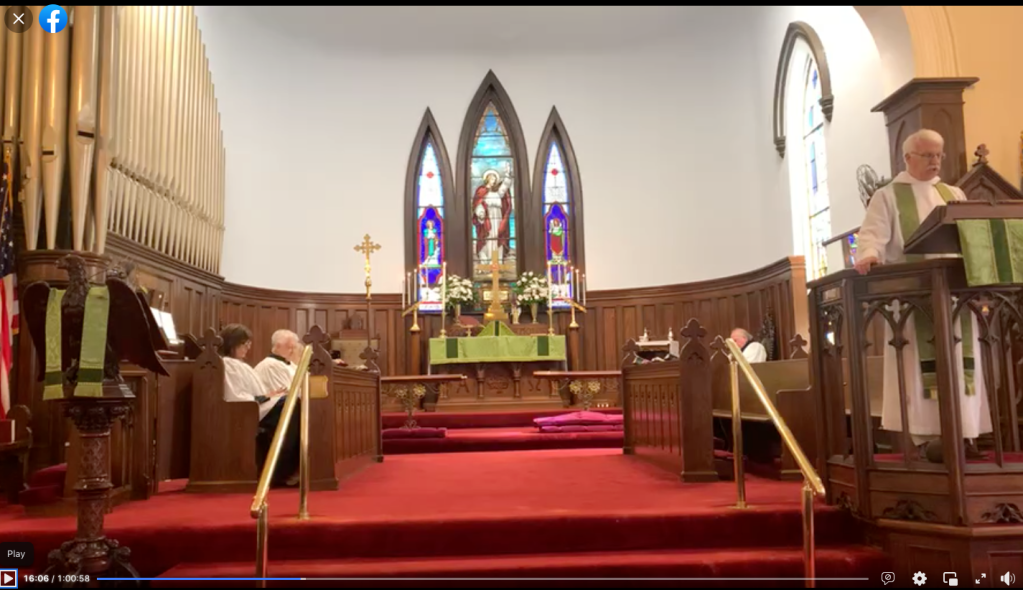 When the COVID-19 pandemic hit in 2020, forcing the suspension of in-person worship, local churches turned to the internet and began livestreaming Sunday services to their congregations.

The pandemic has since subsided, and while three local churches, St. Paul Catholic Church, St. Michael Catholic Church and Church of the Holy Trinity, have stopped livestreaming, other local pastors say they are continuing to livestream Sunday services, which have become a form of outreach; in many cases bringing a new audience on Sunday mornings besides members who may not be able to attend.

And they say they have no immediate plans to stop.

“Our plan for the foreseeable future is to continue livestreaming,” said the Rev. Kevin Bradley, pastor of Crawford Street United Methodist Church. “We found there are folks that are shut-ins and they can’t come (to the service) that are part of our church community and have benefitted greatly from being able to be a part of their church’s worship service via livestream.”

He has also found that when members go out of town and miss service on Sunday “they’ll access the livestream even after it initially runs live on that Sunday and they come back and revisit the worship service. Because of that, we’ve decided it’s important to keep.”

Some of the viewers, Bradley said, are out of town.

“My mom in Atlantic Beach, Fla., and my aunt in Atlanta, Ga., tune in every Sunday, and we see that other folks have just found us in the midst of COVID. Many have continued to tune in livestream or to access us later on.”

Dr. Matt Buckles, pastor of First Baptist Church, said livestreaming “has really been a blessing to us. We have some people who are unable to come to church or may not be ready to return to church because of health concerns.”

He said the church’s services reach out beyond Vicksburg, adding, “When our people are on vacation all across the United States, they’ll take out their phones and laptops and worship with us from where they are. And because it’s archived, you may not be able to watch it right then — Sunday morning at 10:45 — but maybe catch it after lunch or at a time convenient.”

Last Sunday, he said, he met a man from Dallas, Texas, after the service who grew up in Vicksburg.

“He told me his Sunday morning routine — he goes to early service at his church; he gets back home and sits at his computer and watches First Baptist, which is where he went to church.”

Occasionally, Buckles said, he has family members tell him they’ve seen the service. “We will stay with it; it’s another avenue of ministry and worship,” he said. “First and foremost, we’re called by God to gather publicly with others but where this technology can benefit, we’re happy for it. It’s not a substitute for public gathering but it’s an option for someone who cannot.”

“We have regular folks who watch from home for various reasons; some have some health concerns, they don’t want to come to church right now, others who are homebound because of chronic illnesses and then a couple of people may have moved to other states,” said the Rev. Elisabeth Malphurs, rector at St. Alban’s Episcopal Church in Bovina.

And as long as the Internet in Bovina permits, Malphurs said, “We’ll do it faithfully every Sunday and you’ll be able to hear it; the volume will be clear.

“We have a number of people for whom that’s their way of joining in church now and I can’t think of a good reason to not continue to provide that lane for folks to join church.”

The Rev. Bill Wright, pastor of Trinity Baptist Church, called livestreaming an avenue that allows the church to stay connected with some of its homebound members “and also we have folks that watch that check us out before they come and attend in person. It’s still a means of ministry but it’s an outreach for the church as well.”

Like the other churches, Wright said Trinity has members who have moved away or members with extended family members who watch the service.

“My dad lives in Missouri and he watches our services. I have aunts and uncles that watch our services and their friends watch.

“It’s really kind of interesting; people from former churches where I pastored will watch.”

The Rev. Sam Godfrey, rector of Christ Episcopal Church, said “different folks from different places at different times” watch the church’s livestreamed services, including former members living around the country and folks who may have family attending Christ Episcopal.

“We also have older members who are not able to be here or people who are traveling and sometimes they tune in.”

Another service with a livestream audience is Godfrey’s daily 8:30 a.m. morning prayer service.

Livestreaming, he said, “Is a way, because of COVID, that we stumbled on to share what we have and to invite people in. It’s a new way of doing things and one of those things that we found we were able to reach some people that we had not reached before. You share the gospel any way you can.”