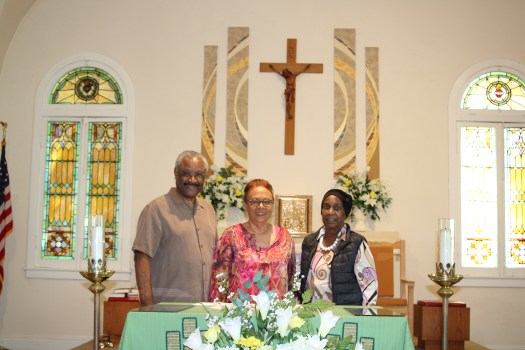 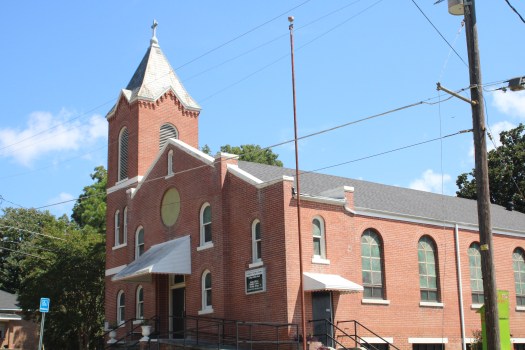 St. Mary's Catholic Church at Main and Second North streets was built in 1923. The parish was established in 1906. (Photo by John Surratt)

For 116 years, St. Mary Catholic Church has been a source of spiritual guidance and education for African American Catholics in Vicksburg and Warren County.

Its importance to the community will be remembered on Oct. 16 with a ceremony dedicating two historic markers — one for the church and another for the elementary and high school.

The markers, said Benny Terrell, a member of the marker committee, were the idea of the church’s pastor, the Rev. Joseph Nguyen.

“He decided that he wanted to do something to recognize St. Mary’s; to highlight the significant contributions of St. Mary’s Catholic Church and St. Mary’s School to the spiritual and educational needs of the Vicksburg community,” he said. “We wanted to cover those things that we have done that have impacted this community and a lot of the minority people in this community.”

The original plan, Terrell said, was to unveil the markers in 2021 to celebrate the church’s 115th anniversary, but the impact of COVID-19 delayed the plans.

“We couldn’t get the markers done until 2022 but we decided to go on and do the dedication anyway.”

St. Mary’s parish was founded in 1906 by the Rev. Aloysius Heick. The first church was on Holly Street “right behind where United Cleaners is located on Cherry Street, down the hill,” Terrell said.

The Sisters of Mercy provided the altar for the first church, the candlesticks and the priest’s vestments, and the priests at St. Paul Catholic Church provided a place for Heick to stay until St. Mary’s moved to its present location at Main and Second North streets later in 1906 and also started an elementary and high school. The present church was built in 1923.

The congregation at St. Paul’s collected $279.80 that they donated to Heick to buy the land and philanthropist Catherine Drexel, who was later canonized a saint, provided half of the money necessary to get the property.

“When they moved from Holly Street, there were three houses on the lot,” committee member Josephine Williams Calloway said. “They utilized one for the priest, one for the school and one for the nuns when they came.”

School attendance at the time was so low, she said, the grade school and high school were housed in the same building.

“They (parish officials) had to contact most of the parishioners to see how many would come to the school,” she said.

A two-story Greek revival building was built in 1908 and was later used for the high school. Drexel, Calloway said, contributed money for the building.

“She came here to inspect it and according to accounts, she was very impressed with what they were doing,” she said.

“She was very dedicated to supporting Black Catholics in this country,” Terrell said. “Not only did she provide funding to help secure our property, but when Father Heick went to Jackson, she helped secure the property over there by donating funds. “She also paid for Xavier University in New Orleans. She was very generous and very supportive of Black Catholics and Native Americans.”

The nuns who taught the children at St. Mary’s were members of the Sisters of the Holy Spirit, “Which were all German,” committee member Cherrie Boykin McClelland said.

“And in order to teach in Mississippi, the teachers, if they had not completed their teacher training in Germany or Holland, they had to go to DePaul University in Chicago and get an additional degree before they were allowed to teach here,” Calloway said. “So most of our teachers had two degrees and one of our teachers was a professor at Peking University (before Catholics were expelled from China).”

“They spoke limited English and they practiced English on the way from Europe to the United States,” Terrell said.

Because they were teaching African American children in the then-segregated Jim Crow South, “The nuns were not that welcome in Vicksburg and the congregation was the one that really supported them,” Terrell said.

“The nuns would not go anywhere by themselves; they would always go in pairs. People still did not cater to the idea of white nuns teaching Black kids,” he said.

“Sometimes they were referred to as the ‘N Nuns,’” McClelland said.

But the members of St. Paul took a different attitude.

“The contribution of the white community should be noted because the congregation consisted of Italian, Irish, German and Lebanese and they supported the nuns,” Calloway said. “Mother Hildegard, a Sister of Mercy nun, and her family supported the missionary sisters when they needed food and help.

“A number of prominent whites attended St. Mary’s on a regular basis and still do,” she said. “Although this is an African American parish, it has truly served the community of Vicksburg and welcomed everyone who came. Although we may be assigned to the back pews of St. Paul, they were integrated into the total Catholic community at St. Mary’s. They helped us and we helped them.”

When a new high school building was built in 1948, McClelland’s father, a contractor, contributed most of the money and materials.

“I think he actually built the high school, along with other adults,” Terrell said.

“Our parents worked hard to support St. Mary’s,” Calloway said. “We are continuing their effort. What we have done here has influenced the whole community.”