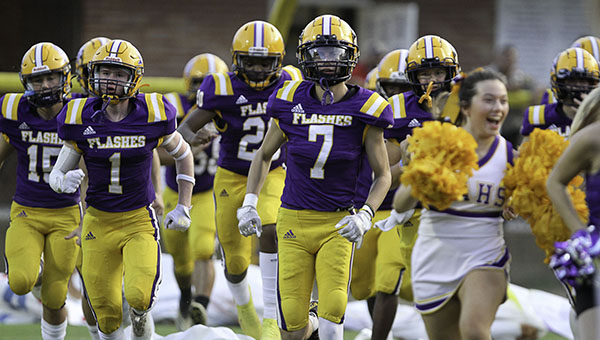 St. Aloysius' football team runs onto the field before a game earlier this season. The Flashes will host Adams County Christian School Friday at 7 p.m. at Farrell Stadium. (Paul Ingram/For The Vicksburg Post)

The first month of the season has not gone the way the St. Aloysius Flashes planned or hoped.

Injuries sapped the depth they thought would be a strength. They’ve lost three of their first four games. And now they get to play one of the best teams in the MAIS.

Adams County Christian School (4-0, 1-0 MAIS District 3-4A) visits St. Al (1-3, 0-1) on Friday night, and Flashes coach Bubba Nettles had no doubt what it would take for his team to get back on track.

“An absolute perfect game from everybody involved. From the head coach, to both coordinators, to the position coaches all the way down to the players,” Nettles said. “That doesn’t mean it’s out of the question. I firmly believe we can do it. It’s just a matter of going out there and having a great week of practice, focusing up, getting back to the fundamentals, and I think Friday night when the horn finally blows that can be an exciting sideline.”

St. Al won its opener against Park Place, but has dropped the last three. Injuries have plagued the

Flashes, literally, since the season began.
Senior running back Padre Gray sprained his ankle on the first series against Park Place and missed two games. Lineman Matthew Pitre dislocated his knee in a freak accident before practice, and center David Wallace also has a knee injury. Receiver Ahmad Stewart missed last week’s 33-16 loss to Brookhaven Academy because of an illness.

The injuries have forced Nettles to shuffle his lineup. Some players are now playing out of position, most are playing both offense and defense, and talented freshmen who were going to add depth are starting. Out of 31 players on the preseason roster, Nettles said only about 20 are now available.

Nettles was pleased with how his players have handled the adversity, but said it’s reached a point where they’re becoming short-handed and outmanned.

“It’s not from lack of effort. These kids are giving us every single thing they’ve got. We’re just running out of gas,” Nettles said. “Depth is an issue right now with injuries, and with the schedule we’re playing it’s tough.”

While the sky is dark, there have been some bright spots. The defense has played well, and the offense outscored Brookhaven Academy 13-12 in the second half last week.

Quarterback Carson Smith threw two touchdown passes and John David Liggett finished with 125 receiving yards against Brookhaven. It wasn’t enough to pull out a win, but it was a needed spark. St. Al scored one touchdown in 10 quarters before that.

“We’ve thrown those RPOs (run-pass options) all year and none of them have been caught. We finally catch two of them, and one goes for a touchdown and another one goes for a 45- or 50-yard pass play,” Nettles said. “If we can start to hit those RPOs that will clear the box out some, and if it doesn’t we’ll keep throwing it. I know we have receivers that can catch the football.”

Finding anything that can work against ACCS will be beneficial. The Rebels have won nine games or more in eight of the past nine seasons and reached the semifinals or state championship game in six consecutive years.

Although there is a healthy dose of respect, Nettles wasn’t about to concede the result without a fight.

“They can be beat, and it would be wonderful if on this field Friday night we shock the world,” he said. “And I think that we can do it.”