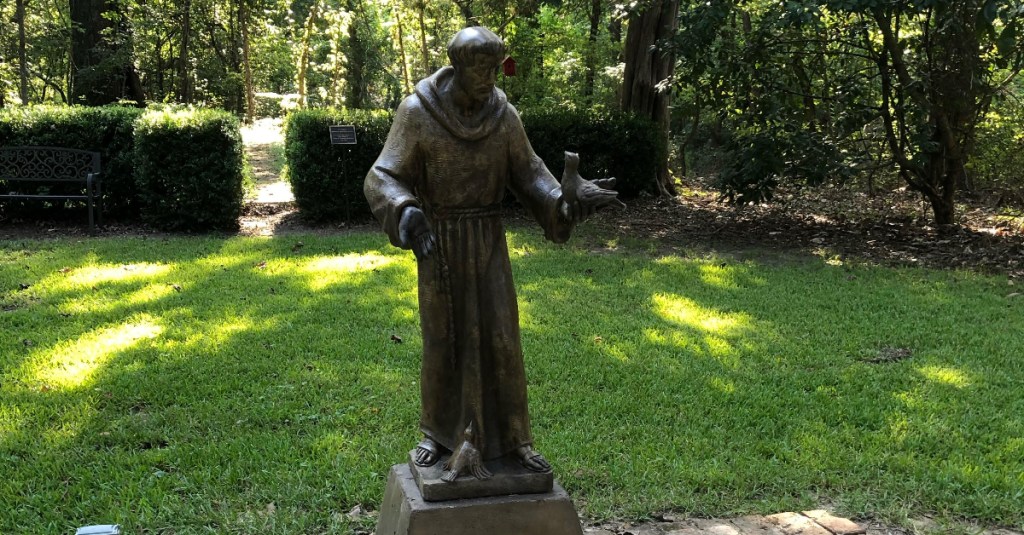 The members of St. Alban’s Episcopal Church in Bovina will participate in a decades-old tradition of blessing the animals during an Oct. 9 service at the church’s outdoor chapel followed by the dedication of a pet memorial garden in memory of parishioner Frank Skinner, a lifelong member of the church who died in 2021.

The blessing of the animals is held on the Sunday closest to the feast day of St. Francis of Assisi, who is closely associated with animals and nature.

According to the Encyclopedia Britannica, St. Francis was the son of a well-to-do cloth merchant but after a religious conversion, he left behind his old life to preach and live in accordance with the Gospel. He died on Oct. 3, 1226, in Assisi and was canonized on July 16, 1228.

Besides the Franciscans, he founded the Order of St. Clare, or Poor Clares, and the lay Third Order.

He was also a leader of the movement of evangelical poverty in the early 13th century. His evangelical zeal, consecration to poverty, charity and personal charisma drew thousands of followers. Francis’s devotion to the human Jesus and his desire to follow Jesus’ example reflected and reinforced important developments in medieval spirituality.

St. Francis considered all nature as the mirror of God and as so many steps to God. He called all creatures his brothers and sisters and preached to the birds and persuaded a wolf to stop attacking the people of the town of Gubbio and their livestock if the townspeople agreed to feed the wolf.

“Today, we cherish our animals for different reasons, and although we have had cows and horses show up, mostly we have dogs and cats show up for the blessing of the animals, which is usually held in conjunction with the feast day of St. Francis,” she added. “We gather in our outdoor chapel, which is like a small amphitheater. It is under the trees and shaded under the trees, and there’s an altar.”

Typically, Freund said, the blessing of the animals is a regular service followed by a brief interlude where St. Alban’s rector, the Rev. Elisabeth Malphurs blesses each animal at the service. The blessings are followed by a prayer with the congregation and then the Communion part of the service.

This year, Freund said, Malphurs decided to do something special and include a “biscuits and biscuits” snack after the service, where pets  and their owners can both get a treat.

“So the people will have biscuits and we’ll have dog biscuits and cat treats for the animals,” Freund said. “Anyone who comes will get biscuits and biscuits and their animals blessed. You don’t have to be Episcopalian to come. We’re inclusive for all.”

The memorial garden features stones with the names of people’s pets that have died and the park, Freund said, features handmade birdhouses and bird baths and passes around and under the trees in a glade. The garden features a 3-foot tall statue of St. Francis donated by the Rev. Billie Abraham, St. Alban’s former rector. Also during the day, Lorelei Books will have a book fair in the St. Alban’s parish hall with part of the income from book sales going to the church.

“We’re hoping for good weather,” Freund said, adding that in the past some unusual pets have been at the blessing.

“In the past, when (the Rev.) Billie Abraham was our priest, we had things like very large spiders and goldfish; we had a Maine Coon cat for a couple of years. It’s interesting to see what people bring, really.”