Tucked beneath shade trees in backyards, gently swaying as cars pass by on busy streets, collecting morning dew before their short time bringing us joy comes to an end, spider lilies are one of the first telltale signs of fall.

Also known as surprise lilies, corpse flowers, red magic lilies or equinox flowers, the Lycoris Radiata originated in Asia, specifically China, Korea and Nepal, before making its way to Japan, the United States and other locations around the world. In Japan alone, the spider lily is known by more than 1,000 different names. 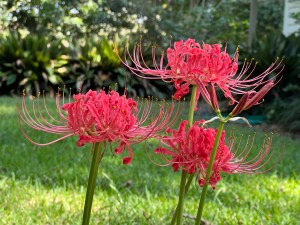 The red spider lily, or Lycoris Radiata, is one of the first signs that fall is on its way. (Photo by Anna Guizerix | The Vicksburg Post)

And — some readers might need to clutch their pearls for this one — in some circles, they’re known as “Naked Ladies,” owing to the fact that the scarlet blossoms appear as if by magic on bare stems with no foliage.

In the Buddhist tradition, spider lilies are known as a sign of rebirth, traditionally planted — or simply sprouting — on graves of loved ones. According to tradition, the red, thin-petaled blossoms are also said to line the path of someone you’ll never meet again.

I spotted a few spider lilies in my yard over the last couple weeks, with a peculiar trio sprouting up in the middle of my backyard. The rest have withered and nearly spent all of their estimated two-week lifespans, but these three are clinging together, a small flame point among blades of lush grass.

As tempting as it is to pluck these unusual buds from the earth, it might be best to leave them be.

For one, they are considered poisonous, especially to pets. Deer and rabbits are known to leave them alone. Another, albeit more superstitious, reason to admire the lilies from afar is their heavy association with death.

In the Japanese tradition, it is believed that those who pick a red spider lily and bring it into a home will cause the home to burn to the ground.

Left alone to flourish year after year, these perennial bulbs will continue to add a bit of bright color to our otherwise green-swathed Southern fall seasons.

So, while temperatures climb back to the upper 90s this week, we can rest assured in the comfort of our air-conditioned homes that soon, fall will be here to stay for a spell.