PCA starts charting its path to the playoffs 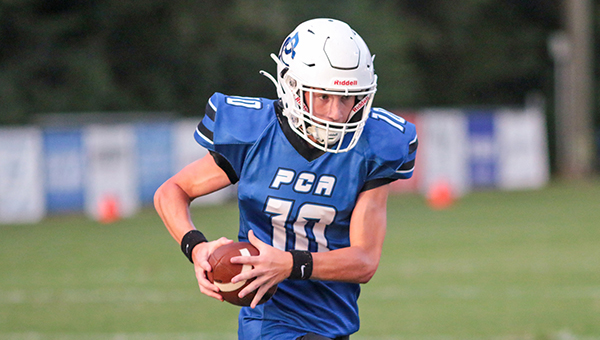 At the halfway point of the MAIS football season, Porter’s Chapel Academy is sitting in a pretty good positions.

The Eagles have a 3-1 record and the fifth-best power point average in Class 2A. Their status as a playoff team seems secure, and they can start plotting out ways to improve their seeding.

Unfortunately, there’s another half of the season to go starting with a road game Friday night at Wilkinson County Christian and a lot of dreams can turn into nightmares if they don’t take care of business.

“It’s fun to look at, but none of it matters right now. There’s a lot of football to play,” PCA coach Blake Purvis said. “The next couple of weeks things will start to level out some based on your districts. It’s always nice when you’re in. Once you’re in, anything can happen. Just stay healthy and see how it shakes out.”

WCCA (2-3) is a Class 1A team that is not in contention with PCA for a wild card spot, but that hardly diminishes the importance of the game. The MAIS power points formula rewards victories, so adding to the win total at every opportunity is vital. The Rams are also no pushover, Purvis said.

“They’re not a 2-3 team. They could very easily be 4-1,” Purvis said. “But that’s a game we won last year. If we want to get back to where we were last year or do better, we can’t afford to slip in this game. It’s as must-win as must-win can be.”

PCA has won back-to-back games and seems to have ironed out some concerning issues from the two outings before that. The Eagles’ defense shut out struggling Discovery Christian, then blanked Ben’s Ford in the second half of last week’s 30-20 victory.

In its three wins, PCA is allowing 10.6 points a game.

“We felt like our defense should have been our strength coming into the season. We had seven starters coming back. When you return that many guys on one side it should be a strong unit, and it has been,” Purvis said.

Fighting through some adversity against Ben’s Ford will also be beneficial, Purvis added. The Eagles fell behind 20-6 late in the first half, then scored four unanswered touchdowns to surge ahead and win. Two of the touchdowns came in the last two minutes of the first half.

“We were in a position when, in the past, things have spiraled out of control,” Purvis said. “We did what we focused on the last two weeks and just focused on ourselves. As long as we continue to do that, we’ll be in the conversation.”