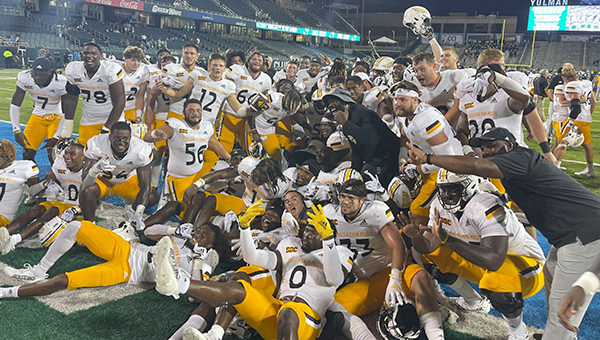 NEW ORLEANS — Southern Miss went down to the Big Easy and got the biggest win of the Will Hall era so far.

Freshman quarterback Zach Wilcke threw a pair of touchdown passes, Eric Scott, Jr. returned an interception for a score, and Southern Miss handed Tulane its first loss of the season, 27-24 on Saturday.

Hall, a former Tulane assistant, won in his return to his old stomping grounds. After the final whistle he sprinted away from his players’ attempt to douse him with a water bucket before running to the end zone and rallying a cheer from the visiting Southern Miss fans.

Southern Miss trailed 17-10 at halftime, then scored 17 straight points in the second half to take control.

Wilcke’s 37-yard touchdown pass to Jakarius Caston tied it late in the third quarter, then Scott’s 35-yard pick-six stretched the Southern Miss lead to 27-17 with 7:07 remaining.

Wilcke was 17-of-25 passing for 194 yards. Caston had a career-high eight receptions for 91 yards. Jason Brownlee also caught three passes for 168 yards and a touchdown.

Southern Miss passed up a chance at a long field goal with a minute left, and Tulane nearly made the Golden Eagles pay for it. Michael Pratt led the Green Wave down the field and threw a 25-yard touchdown pass to Jha’Quan Jackson with 19 seconds left to cut it to 27-24.

Casey Glover’s onside kick deflected off a Southern Miss player and bounced around loose on the turf for a moment before USM’s Chandler Pittman finally dove on it to seal the victory.

Tyjae Spears ran for 114 yards and two touchdowns for Tulane (3-1), and also caught five passes for 74 yards. His touchdown runs of 8 and 34-yards gave Tulane a 14-0 lead early in the second quarter.

Pratt was 19-of-29 passing for 247 yards, but he was intercepted once and sacked four times.