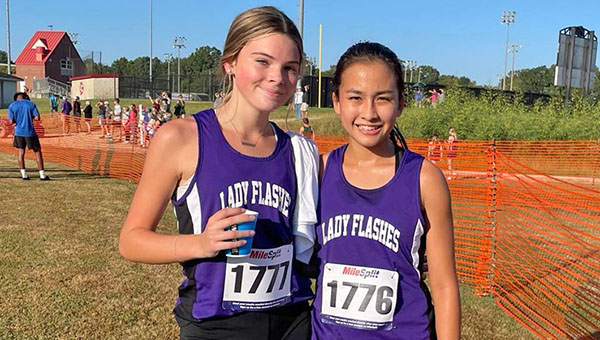 St. Aloysius runners Hendrix Eldridge, left, and Samantha Edwards finished first and second, respectively, at the Clinton Cross Country Invitational on Saturday. It's the fourth time in four races this season that both runners have finished in the top three. (Submitted to The Vicksburg Post)

A St. Aloysius cross country runner atop the results always stays the same. Only the order ever changes.

Eldridge won the 5-kilomter run in the Red Division for smaller schools, with a time of 20 minutes, 29 seconds. It was her second victory of the season, and marked the fourth time in four meets that she and Edwards have both finished in the top three.

Edwards, who has also won two races, clocked a time of 20:39 on Saturday. Columbia High School’s Charlee Brees Franks was third in 21:07.

St. Al finished second in the team standings. Its 51 points were just one behind Choctaw Central’s 50. Choctaw Central had all four of its scored runners in the top 16.

In the boys’ Red Division meet, St. Al’s Walker Lambiotte finished 12th with a time of 20:21 and Dalton Windham was 15th in 21 minutes even.

St. Al finished fifth out of nine teams with 123 points. Choctaw Central won, with 29 points, and Yazoo County was second with 97.

In the boys’ Black Division meet for large schools, Warren Central’s Matthew Brewer finished 38th out of 183 runners with a time of 18:43. The Vikings finished eighth out of 13 teams in the team standings.