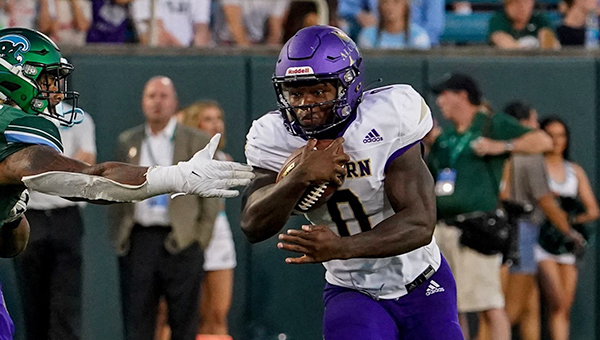 Alcorn State running back Jarveon Howard carries the football earlier this season. Howard rushed for a school-record 295 yards and four touchdowns in a 38-21 win over Arkansas-Pine Bluff on Saturday. (Cedric Tillman/Alcorn State Athletics)

1
Alcorn State running back Jarveon Howard put his name in the school’s record book on Saturday.

The Columbia native who transferred from Syracuse set a school record with 295 rushing yards and scored four touchdowns on 24 carries in the Braves’ 38-21 victory against Arkansas-Pine Bluff.

Howard had a 45-yard TD in the first quarter, went 11 and 24 yards for touchdowns in the third, and finished his big night with a 78-yard touchdown with 4:47 left in the game. Alcorn (2-2, 1-0 Southwestern Athletic Conference) rallied from a 21-10 halftime deficit to win.

Howard’s 295 rushing yards broke the Alcorn record of 274 set by Lenorris Footman against Southern University in 2015.

“We’ve got to find five more yards” to reach an even 300, Alcorn head coach Fred McNair joked after the game.

As a team, Alcorn had 386 rushing yards. Niko Duffey had 44 yards and Javonta Leatherwood 35. Leatherwood also scored a 7-yard touchdown late in the fourth quarter.

Alcorn calls its rushing attack the “Trident Offense,” with all three backs capable of leading the way in any given week. Alcorn is averaging 237.8 rushing yards per game to rank in the top 10 in the Football Championship Subdivision.

“Those guys complement each other,” McNair said of Alcorn’s running backs. “The things they do in the meeting room, they really complement each other. You see how they work in practice and you understand why they run so hard in the course of the game because of their work ethic during the week.

2
Porter’s Chapel Academy has had no trouble scoring touchdowns the past two weeks. It’s what comes next that’s been a problem.

The Eagles are just 1-for-10 on two-point conversion attempts in their last two games. It didn’t cost them in a win over Ben’s Ford on Sept. 23, but turned out to be the difference in a 36-32 loss to Wilkinson County Christian Academy on Friday.

PCA scored three touchdowns in the fourth quarter to cut a 16-point deficit to four, but missed the conversions after all three scores. PCA did make the conversion following a touchdown in the first quarter. It missed on another in the third quarter.

It’s a sudden reversal from the success the Eagles had on tries in the first part of the season. They made 9 of 14 conversions in their first three games.

“We worked on it and had some different things to do. We’ve just got to make plays and focus better on the 2- or 3-yard line and realize the importance of a two-point conversion play,” PCA coach Blake Purvis said after Friday’s game. “It was probably the difference tonight.”

3
Warren Central and Oak Grove played the most exciting game of the week in the MHSAA on Friday night. Given both teams’ knack for close scores and late-game drama, it probably shouldn’t have been a surprise.

Warren Central won in overtime, 42-41, when Jack Wright and Maddox Lynch hooked up for a 10-yard touchdown pass and then a game-winning two-point conversion. That followed a stunning comeback by Oak Grove from 10 points down in the last 2 1/2 minutes to tie the game at 34.

For Warren Central (4-0, 1-0 MHSAA Region 3-6A), it was the third game out of its first four that was not settled until the final minute of regulation or overtime.

The Vikings stopped a two-point conversion with 29 seconds left to beat Vicksburg 20-18, and then sealed a 27-13 win over Germantown with a 99-yard interception return by Treyvion Sanders.

Against Oak Grove, the Vikings rallied from an early 10-0 deficit and held a 34-24 lead before the Warriors scored 10 points in less than 90 seconds and another touchdown on the first possession of overtime.

We put ourselves in a bad situation,” Warren Central coach Josh Morgan said. “But that’s what we do is find a way to win. It’s what we pride our program on, is finding a way to win.”

Oak Grove, meanwhile, needed a fourth-quarter touchdown to beat Harrison Central 18-15 in its opener, then rallied from 20 points down to beat Wayne County 26-23 in Week 2. The Warriors also scored a late touchdown and had the ball with less than two minutes left in a 28-23 loss to Louisiana power John Curtis on Sept. 15. They got as far as the John Curtis 23-yard line before running out of time.

4
Stephen F. Austin delivered the biggest beatdown of the college football season, but turned down a chance at history.

The Lumberjacks beat Warner 98-0 on Saturday. Eight of their 12 offensive scoring drives lasted four plays or less, and three took only one play.

Stephen F. Austin is ranked No. 17 in the Football Championship Subdivision, while Warner is an NAIA member that rode a charter bus 17 hours to the game.

After Robert McGrue scored on a 15-yard run with 6:17 left in the fourth quarter, SFA quarterback Aaron Sears took a knee on a two-point conversion attempt. The act of mercy kept the Lumberjacks from achieving a rare feat. Only three teams since 1970 have scored 100 points in a college game:

The NCAA scoring record was set in 1916, when Georgia Tech defeated Cumberland 222-0.