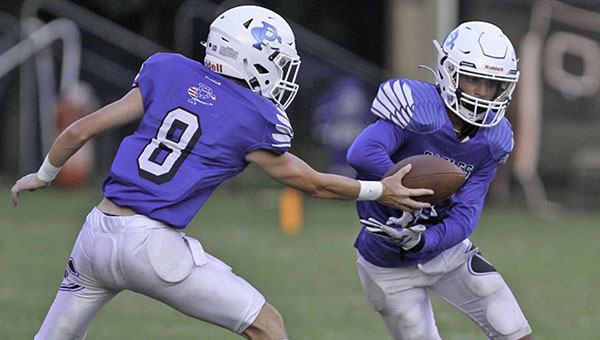 No matter what happens this week, the MAIS District 3-2A champion will not be known until about 10 p.m. on Oct. 21. It hardly diminishes the importance of what happens Friday night, though.

Porter’s Chapel Academy will play defending Class 2A champion Prairie View Academy for homecoming. It’s one of only two district games for PCA (3-2, 0-0 District 3-2A), and the second of two for Prairie View (3-2, 0-1).

The Eagles can either set up a winner-take-all contest for the district title with Tallulah Academy on Oct. 21, or a scenario where they need to beat Tallulah and sort through some tiebreakers to win it.

“You want to be in the conversation, you’ve got to win. There’s only three teams in the district and the other two have already played,” PCA coach Blake Purvis said. “The good thing is, regardless of what happens this week you’ve still got a chance in Week 10.”

One of the keys for PCA, Purvis said, is getting off to a better start than it has the last two games. The Eagles were able to overcome a 20-6 deficit in the first half to beat Ben’s Ford on Sept. 16, but last week gave up two touchdowns in the first three minutes of the game and lost 36-32 to Wilkinson County Christian Academy.

“We played with heart and effort, and those are things you can’t coach. We keep doing that and we’ll be OK,” Purvis said. “We’ve definitely got to get off to a better start. We’re almost not sure until we play if we can do it or not. We have to have confidnece that what we’ve practiced all week will work.”

Getting back to full strength will also help, Purvis said. Three starters, including running backs Jase Jung and Taylor LaBarre, sat out last week’s game with injuries or illnesses.

“Being at full strength, having depth, weapons, all of those things should benefit us,” Purvis said.

The Eagles might need all of them to beat Prairie View. The Spartans lost a dozen players from last season’s Class 2A championship team, but remain a formidable opponent. They’re averaging more than 250 rushing yards per game.

“They lost a lot of guys, but they’re still returning a tough core of guys. They are big and physical. You’re going to earn everything you get,” Purvis said.