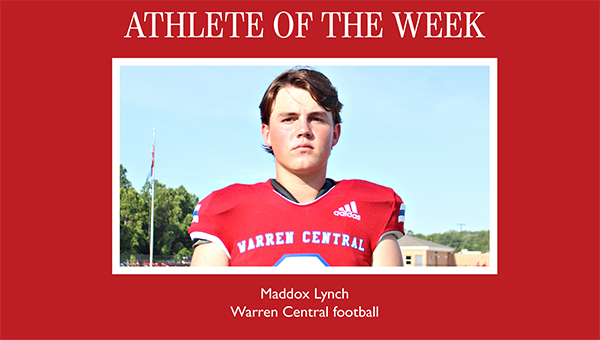 Maddox Lynch had four of the biggest plays in Warren Central’s win over Oak Grove last week, and they rocketed him to the top of the charts in the latest Vicksburg Post Athlete of the Week contest.

Lynch, a sophomore wide receiver for Warren Central’s football team, was selected as Warren County’s top high school athlete from the past week in an online vote of the newspaper’s readers.

Lynch caught three passes for 126 yards and a touchdown in the Vikings’ 42-41 overtime victory against Oak Grove on Sept. 23.

After catching a 10-yard touchdown pass in overtime, he caught the game-winning two-point conversion on the next play for a walk-off win in their MHSAA Region 3-6A opener.

Lynch is also Warren Central’s punter, and he averaged 40.2 yards per kick against Oak Grove. Two of his five punts were downed inside the 20-yard line.

Warren Central, ranked sixth in this week’s Mississippi Associated Press high school football poll, will play at home this Friday against No. 1 Brandon.

Congratulations to Maddox and the other nominees, and thank you to our readers for voting.