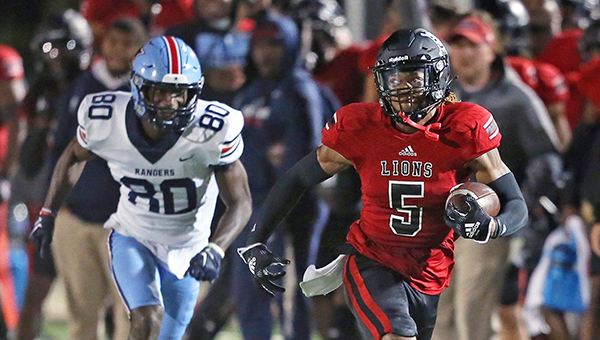 1
By any measure, Porter’s Chapel Academy has turned things around from its darkest times in the mid-2010s.

The Eagles are on the cusp of a second consecutive winning season and have virtually locked up a playoff berth. In three weeks, they’ll play Tallulah Academy in a winner-take-all showdown for the MAIS District 3-2A championship.

Even with all of that, Friday’s 50-42 victory against Prairie View Academy marked another turning point for the program. It was PCA’s first district win since Week 3 of the 2018 season and just the fourth in the last 10 years.

“It’s good to break the streak, but it’s not like we haven’t won a game in four years,” said PCA coach Blake Purvis, whose team is now 14-13 over the last three seasons and 4-2 this year.

PCA’s 12-game district losing streak came against some of the MAIS’ toughest heavyweights. Greenville Christian and Greenville-St-Joseph were district opponents in 2019 and 2020. The 2021 schedule included Class 2A champion Prairie View and semifinalist Claiborne Academy, as well as an always-strong Tallulah Academy.

PCA is looking like a team with a chance to join that list. It can earn a top-three seed and a first-round bye in the Class 2A playoffs, as well as its first district title since 2008, by beating Tallulah Academy on Oct. 21.

2
A couple of Warren County alumni turned defense into offense for their junior college teams on Thursday.

Laurence Sullivan, a former Vicksburg High standout, had a 58-yard interception return touchdown for East Mississippi Community College. He also had seven total tackles, but it wasn’t enough as the eighth-ranked Lions lost 38-21 to Northwest Mississippi.

It was one of two interceptions for Thompson. The other set up a field goal by fellow WC product Brandon Gilliam.

3
No. 14 Ole Miss and No. 7 Kentucky played their first game against each other as ranked teams since 1958. It was one of several things about the game that hadn’t been done in a long time:

4
New Orleans Saints kicker Will Lutz kicked a 60-yard field goal in Sunday’s 28-25 loss to the Minnesota Vikings in London. He also missed a chance at history when his game-winning 61-yard attempt hit the upright and crossbar before bouncing out as time expired.

Only five other kickers have more than one 60-yard field goal in their careers. None have done it in the same game, so Lutz would have become the first if his double-doinked kick had fallen on the right side of the crossbar.

“I thought they were both in,” Lutz said. “I hit them both on the screws. I’m still kind of in shock the second one didn’t go in.”

Lutz’s 60-yarder with 1:55 remaining in the game did tie one NFL record. He became the third Saints kicker with a 60-yard field goal, tying the franchise with the Arizona Cardinals and Denver Broncos as the only three with that distinction.

The Dallas Cowboys have had three 60-plus yard field goals in their history, but all three were by the same kicker — Brett Maher, who did it in 2018 and twice in 2019. Maher is the only player in NFL history to achieve that feat.