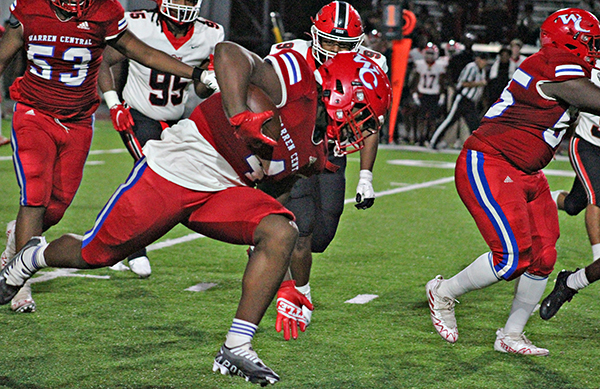 Warren Central running back Mark Gray (4) carries the football last week against Brandon. The Vikings will go on the road this Friday to take on Northwest Rankin. (Ernest Bowker/The Vicksburg Post)

With two games against state championship contenders in the rearview mirror, it might be tempting for Warren Central to think it’s earned a breather.

The Vikings go on the road Friday to play Northwest Rankin. Six of the eight teams in MHSAA Region 3-6A have at least one win after the first two weeks of the league schedule. The parity of the league and the math of the playoff race makes this yet another crucial game in a season full of them.

“You have very good programs, very well-coached, and very good players sprinkled throughout it. Each week is truly its own,” Warren Central coach Josh Morgan said of Region 3-6A. “You’ve got to be able to go the distance, and you’ve got to be able to mentally hang in there and you’ve got to continue to improve. There’ll be some teams that get hot and there’ll be some teams that fall off. We’re trying to make sure that we’re one of those teams that continues to improve and gets better every year.”

Northwest Rankin (2-3, 2-0 Region 3-6A) has recovered from an 0-3 start by winning its first two region games. It is tied with No. 1 Brandon for first place and can take a big step toward earning a playoff berth by knocking off the Vikings for the second year in a row.

The Cougars have run for 378 yards in their last two games. After committing seven turnovers in their three losses, they have none in two wins. Morgan said he’s approaching them as a talented and hot team on a winning streak, rather than the one that struggled out of the gate.

“They’re 2-0 in the district and tied for first in it, and that’s how we’re looking at it,” Morgan said. “They’re getting better every week. They’re running the football more and being creative in how they’re doing it with formations and personnel groupings. It’s definitely going to be a challenge for us.”

On Warren Central’s end, the challenge is how to regroup after taking its first loss of the season. Brandon beat the Vikings 21-3 last week, in part by hitting a string of big pass plays in critical situations. Of the Bulldogs’ 388 total yards, 131 came on four pass plays. They scored two of their three touchdowns on fourth down.

It was a continuation of a troubling trend for the Vikings (4-1, 1-1). In their two region games, they’ve allowed 11 plays of 20 yards or more. They gave up one in the first three games.

“Every one of them we’ve had three people around the ball, double coverage, triple coverage,” Morgan said. “We have to be better at making plays. You’re going to play some really good folks who can make plays, so we need to continue to work on that and do the best we can.”

The Vikings also need to mentally cleanse their palate after losing their feeling of invincibility. They’d gutted out a couple of tough wins early against Vicksburg and Germantown, but couldn’t find the same magic against Brandon.

Responding to a different kind of week-to-week adversity, Morgan said, will determine whether the Vikings can get back in the driver’s seat in the Region 3-6A playoff race or need some help as the second half of it unfolds.

“It’s all about our response. We have to shine some light on some things to get better. You can’t cover up your deficiencies. You have to call them what they are and work on them,” Morgan said. “You’ve got to keep everybody on board and learn from your mistakes, and get better from it. That’s the challenge after a loss. But our response has more to do with it than anything. We’re looking for our guys to handle it the right way and make us a better football team down the stretch.”