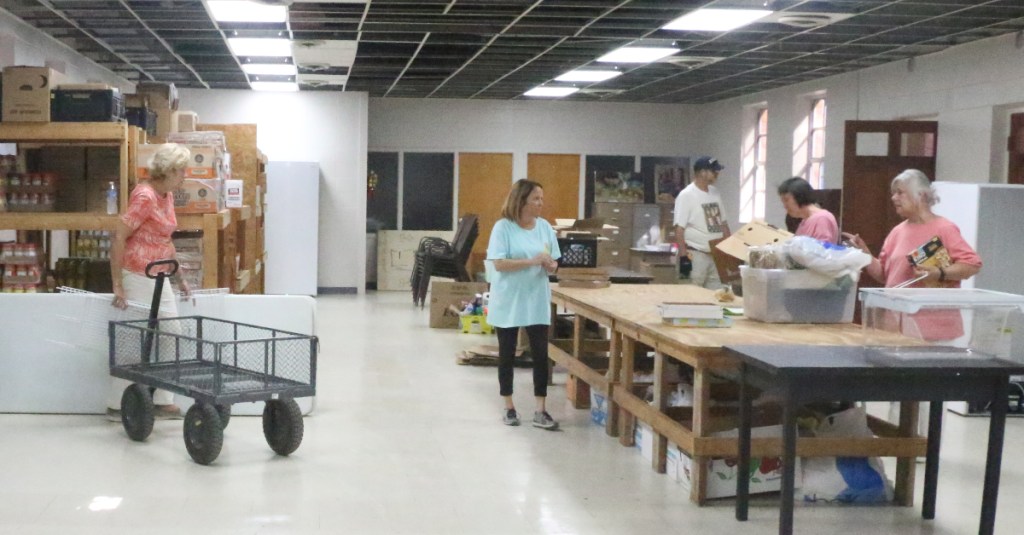 It seemed that all options had been exhausted — Storehouse Community Food Pantry volunteers Betty Kamman and Bill Mounger had scavenged the town.

Time was running out for the non-profit to find a new location where they could serve those needing assistance. Even Mayor George Flaggs Jr. had tried to help by offering an empty building owned by the city. But unfortunately, it had been too small to house the pantry.

But thanks to those from on high — God and a roofer — a new home for the food pantry has been found.

Earlier this year, volunteers with the food pantry, a non-profit organization, had been notified that the space they were leasing from Good Shepherd Community Center would no longer be available. Good Shepherd, also a non-profit, was in the midst of expanding its preschool and aftercare program and needed the space the pantry was occupying. Volunteers with the pantry were told they had to be out by Nov. 1.

As of two weeks ago, still nothing suitable had been found, but last week, food pantry volunteers were informed they would be relocating to the Travelers Rest Baptist Church.

“The space is just perfect,” Kamman said, and when it was presented to the board, she knew it would be approved, since “everyone was still searching” for a place to go.

In conveying to the group, their new location, Kamman said, “I also told them ‘We didn’t find this. God just provided it.’ And I think He did it at the last minute so we would know it was Him.”

Robert Lee, who is a roofer, was also used in God’s plan of finding a new space for the food pantry, Kamman said.

From a conversation she had with Mounger, Kamman said, former food pantry volunteer Willie Hughes told Mounger he had been talking with Lee about the quandary the food pantry was facing.

“Willie loves to talk, and so he was talking to Robert Lee,” Kamman said, adding she didn’t know why Hughes had even brought up the food pantry. “But God placed it on his heart because he said to Robert Lee, ‘You know the food pantry is going to have to close because they cannot find anywhere to move and they have got to be out by Nov. 1.’ And Robert Lee said, ‘Well you know my church, Travelers Rest, has a big room that we are not using and that we were trying to figure out what we could do to help the community, so this might be just what we are looking for.’”

Lee encouraged someone from the pantry to call the church to see if the idea was viable, but before a call was made, Kamman said, she was anxious to do a drive-by of the space to visually see if it would even be an option. Once there, she happened upon the church’s minister, Dr. General Bryant.

“I’m sitting there, and I see the senior pastor marker for his car, (vacant),” she said. “But all of a sudden a truck drives up and parks, and I thought, ‘That’s got to be the senior pastor. That’s the man I need to talk to.’ So, I literally got out of the car and went up to him and introduced myself and told him why I was there.

“The first thing he said to me was, ‘I’ve been waiting on your call.’”

As Kamman shared the conversation that followed with Bryant, she teared up. Kamman has been volunteering at the food pantry since its inception, which was 20 years ago. She had seen firsthand the ups and downs the pantry had weathered and was praying the Travelers Rest space would once again be an answered prayer.

Bryant offered the room as the new space for the food pantry and on Thursday, the move from Good Shepherd to the church, located at the corner of Bowmar and Washington streets began.

Kamman said another prayer was answered when Jimmy Gouras offered his trucks, trailers and men to help with the move.

“God has gone through all of these people,” Kamman said. “It’s just the way God works, and he has always provided.”

The Storehouse Community Food Pantry will be closed on Monday in lieu of the move but will reopen Wednesday, Oct. 12, at 718 Bowmar Ave.