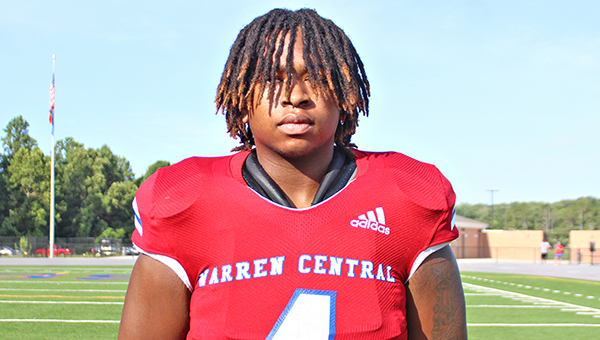 PEARL — Warren Central has found different ways to win each week of this season. Its latest trick was to flat out dominate the fourth quarter.

The Vikings trailed entering the fourth quarter, then ripped off 18 unanswered points in the final period to take down Pearl 38-21 on Friday night.

Mark Gray and Trey Hall each scored two touchdowns, including one apiece during the fourth-quarter surge. Hall caught a touchdown pass from Jack Wright and scored another on the ground, while Gray ran both of his in.

“(Pearl) got all the momentum and they fought their way back into it. They had us on our heels,” Warren Central coach Josh Morgan said. “The fourth quarter, we were able to really take over the game with some big drives. We responded the right way. We played our best quarter of the season tonight. It showed the type of dominant team we can be.”

Freshman Jonah Artman kicked three field goals, including a 31-yarder that put the Vikings ahead 20-7 midway through the third quarter.

Pearl (2-6, 1-3 MHSAA Region 3-6A) rallied, however, to take the lead with two quick touchdowns. Quarterback Jack Durr scored on a 10-yard run and then threw a 4-yard TD pass to Talan Jackson to put the Pirates ahead 21-20 with 44 seconds left in the quarter.

After a short kickoff, Jack Wright threw a long pass to Zack Evans to set up an 8-yard touchdown run by Gray that put the Vikings back in front. A two-point pass from Wright to Maddox Lynch made it 28-21, and the Vikings were off and running.

“Our offense put a really good drive together and got that touchdown and then the two-point conversion. That was the momentum swinger,” Morgan said.

With the win, Warren Central (6-1, 3-1) stayed at the front of the pack in the Region 3-6A playoff race. It has not clinched a berth yet, but has a two-game lead on several teams in the bottom half of the standings with three to play.

Depending on other results, a homecoming win vs. Terry next week could lock up the program’s 11th consecutive playoff berth.

“I’m very pleased. But we have to enjoy this and come back to work on Monday because we’re going to have to keep earning it,” Morgan said. “If we can win one more it puts us in the playoff picture and you have to re-evaluate your goals after that. It’s still a one-week approach.”