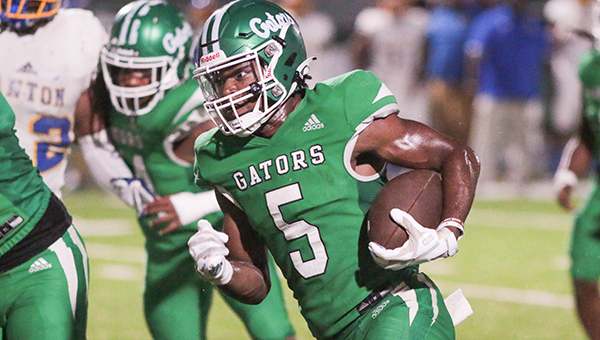 The last time Vicksburg High won a football region championship, its head coach was in high school and its current players were not yet even a gleam in their parents’ eyes.

It’s been 32 years since a group of Gators got to lift a trophy — and this one is ready to end the drought. Vicksburg hosts Neshoba Central Friday, with the winner claiming the MHSAA Region 2-5A title.

“I really had no clue how long it had been. (Defensive coordinator Christopher) Lacey is a football historian, so he talked about it but it still didn’t register,” said Vicksburg head coach Todd McDaniel, who is 45 years old. “Then when I read it, it was like, ‘Wow.’ Thirty-two years, that’s been a long time. That’s something we want to bring back for the city and ourselves.”

The Gators (6-2, 6-0 Region 2-5A) have been building toward this for nearly three years under McDaniel. He embraced a youth movement in his first season in 2020 by inserting nearly a dozen freshmen into the lineup. Those players are now blossoming into outstanding upper classmen.

Defensive linemen Caleb Bryant and Demarcus Johnson are anchoring a defense allowing just 9.4 points per game. They have combined for 34 tackles for loss and 11 sacks.

Junior quarterback Ronnie Alexander, in his third year as the starter, has thrown 10 touchdown passes. Running back Malik Montgomery, a junior in his second year starting, has seven rushing touchdowns.

Vicksburg had four consecutive losing seasons before McDaniel took over. Last week’s 42-20 rout of Ridgeland clinched a second straight winning season, a feat the program had not achieved since 2007-08. It also secured a playoff berth.

Adding a region championship to the pile of accomplishments is simply the next step.

“I think I’ve been a part of nine or 10 district championships, but this would be the sweetest one,” McDaniel said. “You can see the grind because it’s the most recent grind. Putting that thing together when nobody believed at the beginning, and now everything is coming to fruition. We’ve talked about it and talked about, and now it’s here. It’s time to put up or shut up.”

Putting up against Neshoba Central (6-2, 6-0) will not be easy. The Rockets, like Vicksburg, have ripped off six consecutive region wins after starting 0-2 and don’t appear to have missed a beat despite losing several key players from the 2021 team that reached the Class 5A semifinals.

Neshoba Central has won three straight region titles and 27 of its last 28 region games. Its only region loss in the past three-plus seasons was on Oct. 23, 2020 vs. Ridgeland. It beat Vicksburg 10-6 last season.

McDaniel said Neshoba’s success this year is a sign of a great program.

“When you have a program you can lose a lot, but you always have those guys that’s on the sideline waiting,” he said.

For Vicksburg, the rewards for winning this game go beyond ending a long championship drought. It could make the road to the Class 5A championship game run through The Swamp and keep the Gators there until they leave for Hattiesburg on Dec. 3.

Vicksburg has a bye next week, then hosts Holmes County Central in the regular-season finale Nov. 4. If it wins Friday, it would be in line to host all three playoff games barring any upsets in the bracket.

A loss, however, could send the Gators on the road in the second and third rounds. It might also force them to have to beat Holmes County Central for the right to host a first-round game.

“Not having to go on the road to play this football game really means a lot,” McDaniel said. “What this game is, it’s great for playoff standing and playoff seeding. It’s very possible that if we win this game we would host all our playoff games here. This game has a lot at stake.”