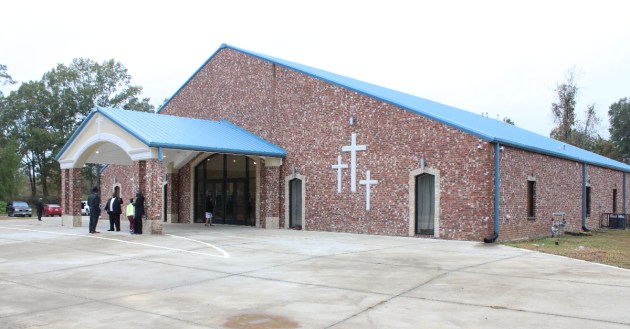 Calvary Baptist Church's new building on Indiana Avenue continues the church's 113-year tradition of serving its congregation and includes items removed from the old church before its demolition. (Photo by John Surratt | The Vicksburg Post) 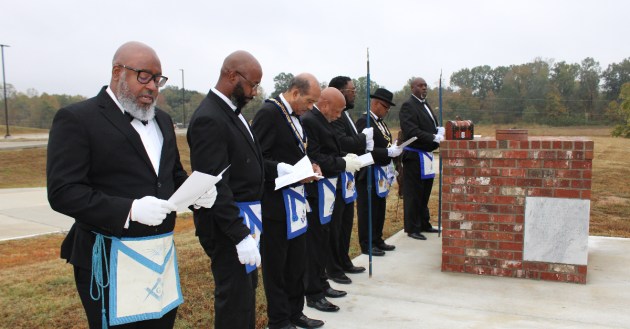 Members of Stringer Lodge No. 1 of the Prince Hall Masons pray during the dedication service for Calvary Baptist Church's cornerstone. The stone shares space with the two cornerstones from the old church building on Klein Street. (Photo by John Surratt | The Vicksburg Post)

The congregation of Calvary Baptist Church dedicated its new church on a hill overlooking Indiana Avenue during a ceremony on Oct. 30.

The program, which included the dedication of the church’s cornerstone, was part of a two-day event that included a family day the Saturday before.

Several years ago, however, a new church was a dream as the congregation faced having to eventually leave the building that had been their home on Klein Street for 113 years and possibly no longer having a place to worship.

In 2015, the Vicksburg Board of Mayor and Aldermen approved closing the Speed Street crossing, the most direct route to the church, to create a ‘quiet zone’ for the residents and bed and breakfasts in the area. The closure marked the second time a crossing in the area was closed.

“There were two separate closings of the crossing,” church historian Bobbie Bingham Morrow said. “There was the closing of the crossing on Klein Street and later on Speed Street. When they closed the second crossing, it blocked a lot of the residents in so you could only go in one way and out one way. There was a lot of uproar about that.”

And the changes coming from that decision to close Speed meant the congregation would have to eventually move from the neighborhood where Calvary began.

Calvary Baptist Church grew from a weekly prayer meeting that gathered at a house at 1600 Pearl Street. It moved to Klein Street in 1909, and the church was built.

“It was a wooden structure that was later bricked over,” Morrow said. “At first the members of the church were baptized in the (Yazoo Diversion) canal. A (baptismal) pool was built outside to the church, and then an inside pool, and they covered the outside pool.”

The church underwent a major improvement program in the 1970s and a second cornerstone was laid in 1973.

Church pastor the Rev. Dr. Joe Mosley said closing the crossing “affected us in a negative and positive (way) because we were affected by coming in and coming out off Speed Street and we had one way in and one way out on Depot (Street) coming in off Railroad Street.”

But instead of hindering the church’s growth, he said, the church’s situation helped, “because people wanted to come and see what was going on with the little church down upon the hill. Our Sunday morning services began to increase, but it gave us the ability to start talking with the railroad and talking with the city about what we could do to make our situation better so we could move forward.

“We were looking for a space where we could build and have the opportunity to grow and develop,” Mosley added.

Mosley said he credits divine intervention in the selection of the property for the new church.

In 2017, he was driving on Indiana Avenue when he saw vacant property across the street from the church’s new site.

“It was for sale and I got out and looked at it and there was a sign in the trees in the background and it had a number and the word ‘call.’” he said. “We didn’t know who to call but we got that number and gave it to our officers and they reached out and got a response on the property on the hill. That’s how we got here.

“It was most definitely God,” Mosley said. “It’s just back in the back; just a little sign with the word ‘call’ and a number.”

Morrow said she went to the site after the demolition to collect some of the remaining stones.

“I loved it (the church),” she said. “That’s where I was baptized, I learned, I grew, I was taught. Everybody down there was family; we were even tied to Travelers Rest when it was located in that area.”

The cornerstones from the old church share space on a brick stand with the new church’s cornerstone.

Having the older cornerstones, Mosley said, allowed the congregation to take its history with it and “establish the foundation so our children and grandchildren can go out and see what we did and where we came from.”

Services at the new church began in 2019. But while it had a new site, Calvary’s congregation had one more challenge — COVID-19.

“COVID shut down activities and services,” Mosley said. “Our dedication was to be 2020, but COVID-19 stopped it.”

Like other churches, Calvary used social media to reach its congregation and although the church has returned to in-person services, he said Calvary continues to broadcast services.

Looking back on the events that resulted in the church’s relocation, Mosley said it feels wonderful to see how the new church has prospered.

“We didn’t know with COVID-19 how this would work, but God has blessed us tremendously to continue to grow even with COVID to where we are now,” he said.  “We’ve had people join our ministries online and they’ll come in in person; it’s been a blessing for us. I know the church is definitely excited for the blessing of the building and for people to come in and see what god has done for us.”

Back when the church was dealing with the possibility of relocating, he said, “I didn’t believe we’d be here. We knew what we wanted, knew what was needed and to see all of this now, that’s by the grace of God. Doing what we’re doing, and being located where we are is definitely a blessing.

“It was an interesting situation to see where we were located with people coming in and joining the church and seeing what was going on with the ministry and see what we were doing and what we were doing was giving them to Jesus Christ,” he added.