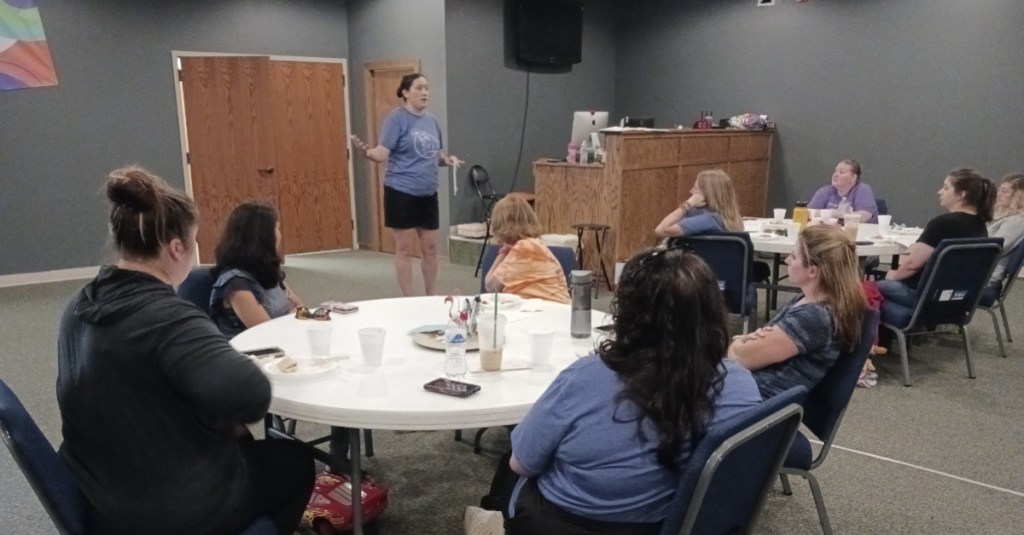 MOPS coordinator Jessica Gain presents the day's devotion to members of the Mothers of Preschoolers, or MOPS, group at Crossway Church. The program provides the mothers of preschool children an opportunity to spend time together for spiritual and social interaction. John Surratt/The Vicksburg Post.

It was 2002 when two women at what was then Bowmar Baptist Church got together to develop a program where the mothers of preschool-aged children could get together for fellowship, prayer and devotion.

Friday, the MOPS (Mothers of Preschoolers) program at Crossway church celebrated its 20th anniversary with a special program at the church for former MOPS mothers and Shelly Tingle, one of the program’s founders, addressing the group.

“We’re a group of moms who know that we can’t do motherhood and life on our own; Jesus created us for a community and He Himself was a community,” said Jessica Gain, MOPS coordinator and member, Next Gen associate at Crossway and the mother of twin 4-year-old sons and a 2-year-old daughter.

“We are seeking to hang out together in a way that will help us be better moms and also just know Jesus more. We are a Christian organization and when moms come in they know that they’re looking for community, but also they’re going to be fed spiritually when they come.”

The group meets the second and fourth Monday of the month from 9:30 to 11:30 a.m. The church provides childcare services for the mothers during the meetings.

The meetings begin with breakfast. “We enjoy being able to sit and talk with other adults for a while,” Gain said, “So we do a potluck breakfast. We always have a theme for the day and we cover some different topics.”

A devotion based on the theme for the day follows breakfast and the members spend time in prayer.

“We usually watch a video or have a speaker about that topic and then we move into discussion, where we break up into table groups and talk through different questions depending on what the topic is,” Gain said.

So far this year, she said, topics have included marriage, conflict and how to fight fair, identity, finding friends — true Christ-following friends, and how to encourage one another through different seasons.

And it all began with two women’s desire to help other mothers of preschoolers.

Tingle said she and Lisa Wamsley thought about beginning a MOPS ministry “and didn’t think we could do it.”

In the beginning, Tingle said, they arranged meetings for moms at playgrounds and the library. “I was just passionate about ministering to new moms; I knew how overwhelming it is to be a new mom.”

While Tingle and Wamsley were trying to determine how to get the ministry going, they met Stephanie Deese, who asked about a MOPS ministry. Tingle and Wamsley began attending training programs across the country to learn about MOPs and how to organize one in Vicksburg.

“It took about two or three years of planning and organizing before the first day,” Tingle said. “We had our MOPS during the day for stay-at-home moms and we also had one in the evening for working mothers. Then we ended up having one for military mothers and teen mothers. It’s been a big success over the years, ministering to thousands of women who need a stable life and need a community (of friends) at this critical point.”

When they began the program, Tingle couldn’t foresee its success.

“I was in my 20s; I didn’t think anything was going to go anywhere,” she said. “I was just thinking, ‘it would be great to minister to women in Vicksburg today,’ and then it didn’t take long before Lisa and I realized we had to invest in new leaders because we were getting older and no longer mothers of preschoolers.”

The women took leadership classes and spent time mentoring the new leaders who were coming to direct the groups.

“In my opinion, success is in succession and I think the fact that it’s still here today is a huge success for me, personally,” Tingle said.

And the relationships the mothers built over the years they attended MOPS have continued.

“They are lifelong friends,” Tingle said. “These are the women I see all the time. They’re people I go out to dinner with, go to the movies together; we’re still doing lots together after 20 years. I think that when you become connected in that stage of life — raising your kids together and doing things together, it’s a community you build for a long time.”

One thing she did not know, Tingle said, was what serving the community of moms entailed, including helping families during tragedies such as Hurricane Katrina, the 2019 flood and 9/11.

She said MOPS meetings were held for mothers who had evacuated the Mississippi Gulf Coast and Louisiana during Katrina to help them cope and to find the care and supplies they needed. Dealing with those issues, she said, helped make her aware of issues, like health care facing children and women.

Beginning MOPS, Tingle said, “Was more than what I thought it would be and I’m absolutely blessed that I answered the call.”