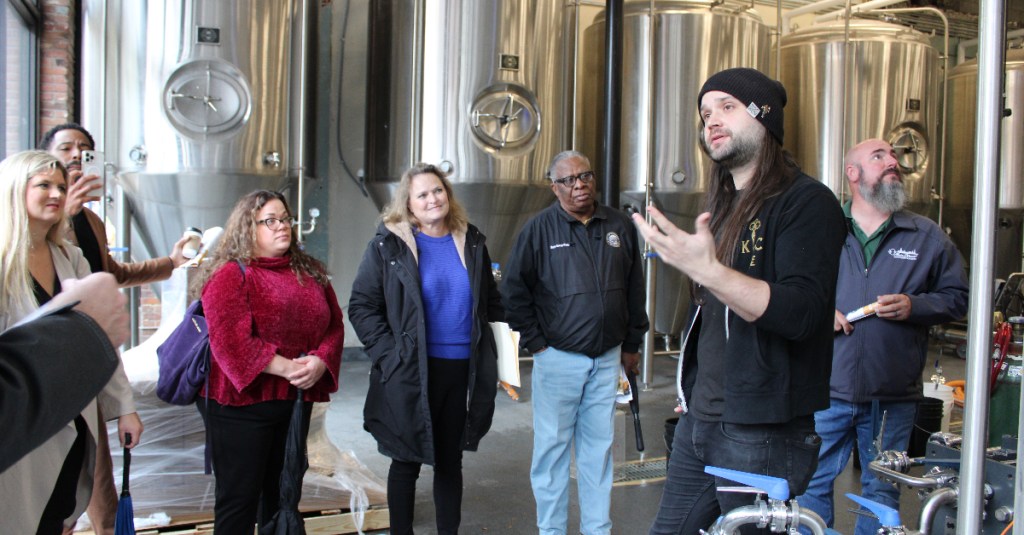 Zack Erickson, right, owner and founder of Key City Brewery, discusses the brewery and the business's future plans with officials during a legislative tour of Downtown Vicksburg on Tuesday morning. (Photo by John Surratt | The Vicksburg Post)

Under the program, state legislators were invited to attend the district tour of their choice with each tour showcasing stops in three Main Street communities. Vicksburg was included in a tour of communities in District 2, which also featured tours of downtown districts in Greenville and Greenwood.

The purpose of the tours was to educate elected officials about the work of Main Street and show the successful efforts on the local level that are supported by the state organization.

Each tour was designed to show the success of local Main Street revitalization efforts, including visiting successful small businesses in the downtown district, visiting restored buildings that have taken advantage of façade grants, historic tax credits or other financial incentives, and meeting some of the local Main Street directors and local leaders.

During the tour of Vicksburg, the group visited the Key City Brewery and heard a presentation by Hopkins on proposed improvements to the downtown area, including Gordon’s Alley.

Hopkins said officials were shown work done with state grant funds and she was able to explain Main Street’s plans for American Recovery Program Act funds, stopped by the Civil War Museum and went to Washington Street Park to discuss the proposed improvements there and to other areas of the city.

“We truly appreciate the support of our state elected officials and were excited to show the success of some of our local Main Street programs,” Gregory said. “Main Street is economic development, and our 48 local Main Street organizations help create jobs and business opportunities while catalyzing public and private investment in our downtowns.”