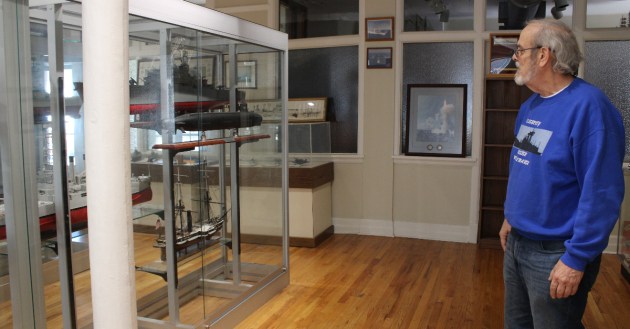 Old Depot Museum Chairman of the Board Dave Benway examines models of a U.S. Navy surface ship and a nuclear submarine named for the state of Mississippi as they sit in a display case on the second floor of the Yazoo & Mississippi Valley Depot where the museum is housed. (Photo by John Surratt | The Vicksburg Post) 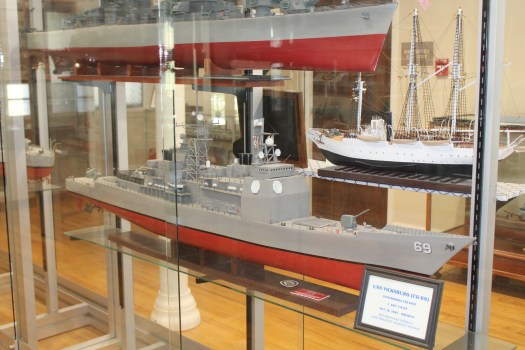 A model of the guided missile cruiser USS Vicksburg sits in a display case. The model and other ship and boat models were moved to the second floor of the Yazoo & Mississippi Valley Depot as the Old Depot Museum expands its collection to make more room for visitors. (Photo by John Surratt) 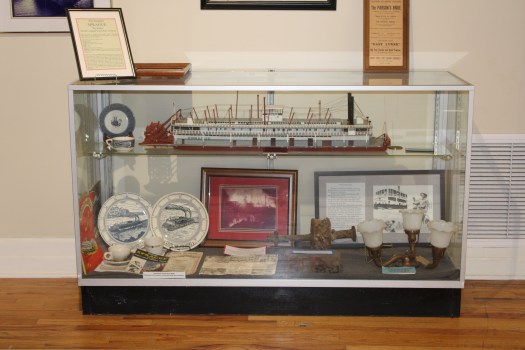 A case displaying a model and items from the steamer Sprague sits in one section of the museum's second floor display area. (Photo by John Surratt)

The displays of ships that once competed with trains at the Old Depot Museum on Levee Street have in the past year gone to a higher level — the building’s second floor.

“We started moving them off this floor to make room for the trains,” museum Chairman of the Board Dave Benway said, adding the move began in November 2021. “We moved all model ships but the Civil War ships. The Civil War ships stayed on the ground floor.”

The move was quite a feat, considering the size of the museum’s maritime collection of U.S. warships named for Mississippi and Vicksburg, steamers, towboats and Civil War gunboats and rams.

A walk or elevator ride to the second floor of the Yazoo & Mississippi Valley Depot that houses the museum reveals a relatively open collection of display cases showing battleships, cruisers and submarines named for Vicksburg or Mississippi. The area that until 2016 held the offices of the Vicksburg Convention and Visitors Bureau now holds cases displaying towboats and steamships, a tribute to area veterans and a display devoted to the steamer Sprague, which was destroyed by fire.

Another display was dedicated to Ensign Jesse Brown, the Navy’s first African American aviator and a Vicksburg-area native who was shot down and killed in Korea providing cover for Marines withdrawing from the Chosin Reservoir during the Korean War. Brown received the Distinguished Flying Cross posthumously.

“It honors one our hometown heroes,” Benway said.

“It’s nice to have a place to be able to see things,” he said.

The extra space is appreciated when people walk into the museum, he said, pointing out that when the cruise boats arrive and the buses are moving, “That’s when we get 30-45 people at one time and they can walk around; that’s what we’re trying to do, improve the experience.”

And more changes are on the way.

Benway said future plans include building a 300 square-foot army base in HO railroad scale on the ground floor and a Mississippi room on the third floor with a Mississippians collection, five Mississippi ships and the deck of the World War I cruiser USS Vicksburg, which is presently in storage.

And with three other vacant rooms available, he said, “We’ll be moving more stuff. It’s coming together.”