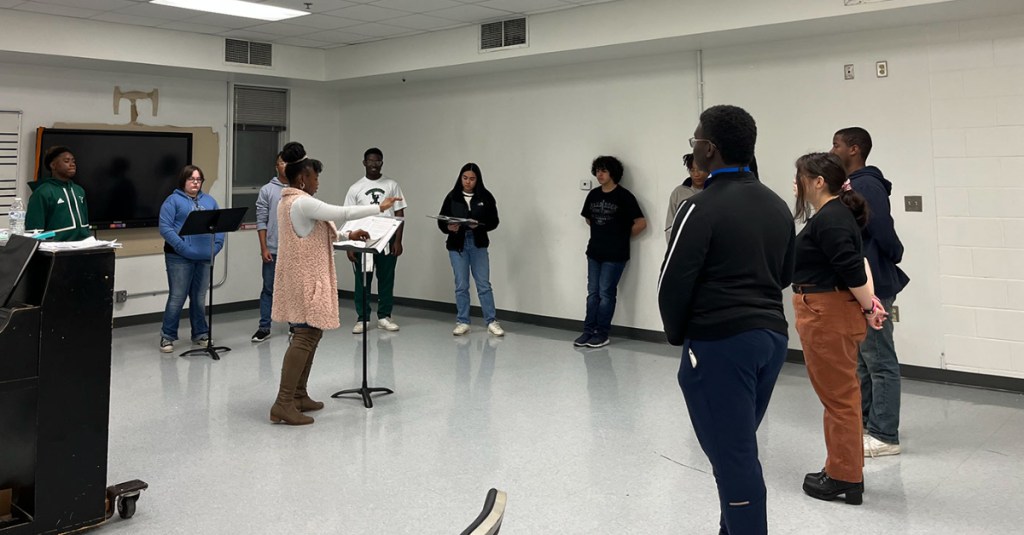 Vicksburg High School’s Madrigal choir, under the direction of VHS choir director Erika Wheeler, rehearses Wednesday for the choir's upcoming Singe Feaste. The event will be held on Dec. 7 and 8 in Wesley Hall at Crawford Street United Methodist Church, 900 Crawford St. The doors open at 6 p.m. and the production begins at 7. Tickets are $25 and are available from choir members and by calling 601-994-3426. (Photo by Terri Cowart Frazier)

It’s a time of crisis for the King.

His trusted jester, who always told him the truth — remember the story of the “Emperor’s New Clothes”? — is no longer part of the court and a replacement must be found. But who will be as loyal? The answer may lie in the upcoming performance of “The Truth Fairy,” presented by the Vicksburg High School’s Madrigal choir during the annual Singe Feaste.

For more than 25 years, a Renaissance-style dinner theater with a three-course meal including a Wassail Toast was performed, initially by both VHS and Warren Central High School’s Madrigal choirs. The schools have since alternated the years they perform and this year, after a two-year break due to COVID-19, the event is back.

“This has been so exciting,” VHS choir director Erika Wheeler said.

Wheeler, who graduated from VHS and was a member of the Madrigal choir, which is comprised of a small ensemble group that mainly performs Renaissance-style music, said, “I remember doing this play when I was in school, and it is a lot of fun.”

“The Truth Fairy” is an interactive play and allows the audience to be part of the production, helping the cast decide who is telling the truth and who is not.

These, she said, were held from 4 to 6 p.m. Mondays and Wednesdays. The choir added Saturday rehearsals from 9 a.m. until noon at the start of November.

“During the Saturday rehearsals we do the lines and read and put the music together,” Wheeler said. “And I think the kids are going to love it when we actually put it (the play) altogether.”

Since the pandemic altered the performance schedule, Wheeler said, “The kids have never had a chance to do it (perform during the Singe Feaste) because of COVID, so it’s all of their first time doing it and getting the costumes.”

Wheeler said most of the students have ordered their Renaissance-style costumes and they have come in, but there are a couple who are still waiting on theirs to arrive before the dress rehearsal scheduled for Dec. 6.

The Singe Feaste will be held on Dec. 7 and 8 in Wesley Hall at Crawford Street United Methodist Church, 900 Crawford St. The doors open at 6 p.m. and the production begins at 7 p.m. Tickets are $25 and are available from choir members, by emailing erika.wheeler@vwsd.org or by calling 601-994-3426.

“This has been a lot of fun creating music with them (the kids). They are super talented and can sing anything you put in front of them,” Wheeler said, adding she hopes people will come out and be part of the Singe Feaste.

Attendees are also encouraged to wear period dress, fit for the occasion.