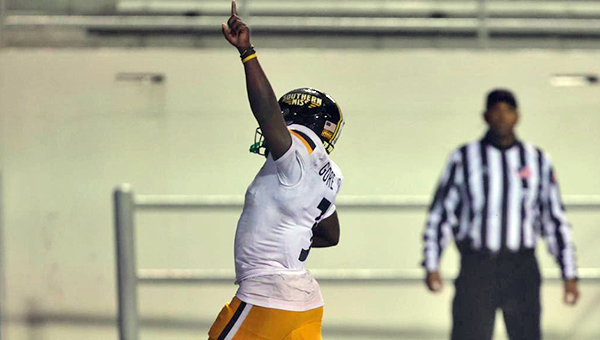 MONROE, La. — It took a month, a big fourth quarter and a career day from Frank Gore Jr., but Southern Miss finally reached its goal.

Gore rushed for a career-best 199 yards, and iced the game with a 33-yard touchdown run midway through the fourth quarter, as Southern Miss defeated Louisiana-Monroe 20-10 on Saturday in the regular-season finale for both teams.

Southern Miss (6-6, 4-7 Sun Belt Conference) earned its elusive sixth win that made it eligible to play in a bowl game. It had lost three in a row since getting win No. 5 against Louisiana-Lafayette on Oct. 27.

Southern Miss last qualified for a bowl in 2019. This is the 23rd time in 28 seasons it has been bowl-eligible.

Louisiana-Monroe (4-8, 3-5) hung tough, despite being nearly doubled up in total yardage. The Warhawks had 231 total yards while Southern Miss had 448. Southern Miss ran for 231 yards.

Southern Miss’ defense also registered four sacks and 13 tackles for loss. ULM quarterback Chandler Rogers completed 17 of 27 passes for 122 yards and one touchdown, while running for 47 yards on 14 attempts.

Despite the lopsided difference in yardage, the score was tied at 10 entering the fourth quarter. Southern Miss took the lead with a 24-yard field goal by Briggs Bourgeois with 12:30 left, and then a big special teams play finally swung the momentum firmly toward the Golden Eagles.

A sack forced a punt, near midfield, which was blocked by Southern Miss’ Brendan Toles. Cameron Knox recovered it at the ULM 33, and on the next play Gore broke a run off the right side for a touchdown and some breathing room.

Louisiana-Monroe got the ball two more times, but didn’t get past Southern Miss’ 44-yard line.

“They had a few more bullets in their gun,” Bowden said. “I told our team, we just blinked. They didn’t.”