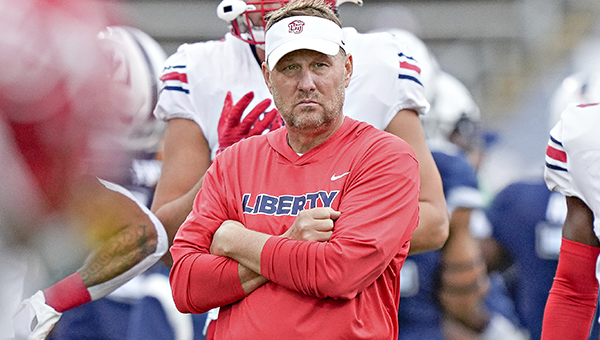 Liberty head coach Hugh Freeze watches as players warm up prior to a game this season. Freeze, who previously coached at Ole Miss, was hired as Auburn's head coach on Monday. (AP Photo / Bryan Woolston)

AUBURN, Ala. (AP) — Auburn is bringing Hugh Freeze back to the Southeastern Conference as head coach of the Tigers, more than five years after his resignation from SEC West rival Ole Miss amid both personal and NCAA scandals.

Auburn athletic director John Cohen announced on Monday the hiring of Freeze, who spent the last four seasons as coach at Liberty.

“After a thoughtful, thorough and well-vetted search, we ended where we started, with Hugh Freeze,” Cohen said in a statement. “Of all the candidates we considered, Hugh was the best fit. Fit has several meanings, but the most important factors were student-athlete development, football strategy, recruiting and SEC experience.”

Cohen was hired Oct. 31, the same day Auburn fired coach Bryan Harsin after he went 9-12 in less than two seasons at a proud program that has fallen on hard times.

Freeze is officially 76-47 in 13 seasons as a head coach at Lambuth, Arkansas State, Ole Miss and Liberty, but he comes with baggage that required extensive vetting by Auburn.

Auburn credits him with a 103-47 record on the field, but he had 27 wins at Ole Miss vacated for NCAA violations.

Freeze called Auburn “one of the preeminent programs in college football.” His daughter, Jordan, attended Auburn and lives in the area.

“I can’t wait to work with our student-athletes and the Auburn family to bring championships back to the Plains,” Freeze said in a statement.

The 53-year-old Oxford, Miss., native led the Rebels to a 39-25 record and four bowl games, and even beat Auburn’s big rival, Alabama, in back-to-back seasons.

He resigned in the summer of 2017 after school officials uncovered a “pattern of personal misconduct” starting with a call to a number used by an escort service from a university-issued cellphone.

That was after the NCAA had started an investigation into rules violations committed by the football program under Freeze.

The NCAA found 21 violations of academic, booster and recruiting misconduct, most of which happened under Freeze’s watch. The rule-breaking landed Ole Miss on probation, including a two-year postseason ban and recruiting restrictions.

The NCAA’s ruling said Freeze promoted an atmosphere of rules compliance but failed to monitor his staff. Freeze received what would have been a light penalty: a suspension for two conference games if he had coached in 2018.

Instead, the personal misconduct matter was uncovered and he was forced to resign in July 2017.

He was out of college coaching for two years before landing in 2019 at Liberty, where he has gone 34-15, including 8-4 this year. The Flames ended the season with three straight losses, including a 49-14 blowout against New Mexico State.

Freeze acknowledged his interest in the Auburn job after that game Saturday.

The process of Auburn hiring Freeze was slowed over the weekend after a former Liberty student who had an interaction with the coach through social media over the summer emailed Auburn officials about the direct message he sent her.

The AP received a copy of the letter the woman sent to Cohen, the athletic director, and President Chris Roberts on Saturday urging the school not to hire Freeze.

The woman was the plaintiff in a lawsuit against Liberty. She alleged she was sexually assaulted at the school and a settlement was reached in the case.

“I’d like to remind the Auburn administration that Liberty University is currently under federal investigation by the Department of Education for sexual assault coverups,” she wrote in the email.

“I have spoken with those running the investigation many times. As a victimized alumna, who has been messaged by Hugh Freeze, I am concerned for the alumni community at Auburn, the current students who will engage with the football program, and the ethos of Auburn if this consideration is true.”

Her sexual assault case and the DOE investigations predated Freeze’s time at Liberty.

Freeze sent a brief direct message to the woman in July, defending Liberty athletic director Ian McCaw, whom the woman had posted negative comments about.

Auburn looked into the matter and found that Freeze was unaware of the lawsuit.

On the field, Freeze has a track record of producing winning teams and exciting offenses.

He helped turn one-time Auburn backup Malik Willis into a star quarterback at Liberty. Willis was a third-round draft pick for the Tennessee Titans in April.

Auburn quarterback Robby Ashford posted a message to Freeze on Twitter: “Welcome to the Plains, let’s get to work we’ve got unfinished business to handle.”

Freeze returns to the SEC West to try to revive an Auburn program that has had plenty of success, but also struggled to maintain it over the last two decades.

Auburn won a national title in 2010 under Gene Chizik and played for another three years later in Gus Malzahn’s first season. But the Tigers haven’t made the SEC championship game since 2017 and haven’t won a league title since 2013.

Running backs coach Carnell Williams, a former Auburn All-American and NFL first-round pick, served as interim coach for the final four games of this season. Auburn went 2-2 and lost 49-27 in the regular season finale to Alabama to finish 5-7.

Freeze said Williams did an “incredible job” as interim coach. “The impact he made is immeasurable and cannot be overstated,” Freeze said.

The announcement of Freeze’s hiring also brought to an official end the rumors that Auburn was pursuing Ole Miss’ current coach Lane Kiffin. Media reports indicated that Kiffin would be hired by Auburn after the conclusion of last weekend’s games, even though Kiffin refuted them several times.

On Saturday, Kiffin seemingly ended the speculation with a voice message to The Associated Press, saying, “Same as I said last week: I’m staying here and we have a lot of work left to do.”