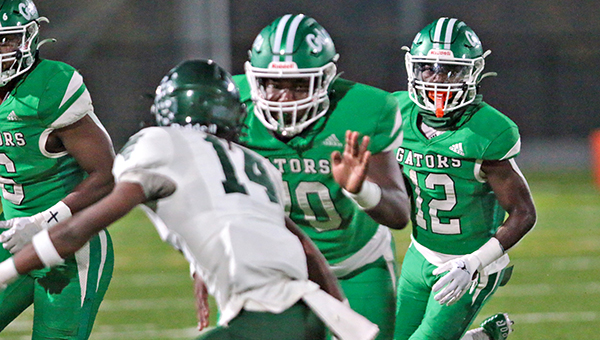 You’re in Four Down Territory, where we look at four notes, stats and trends from the weekend that was in Mississippi high school football, college football and the NFL.

1
Whenever he got a moment to peel back his headset and steal a glance at the stands last Friday, Vicksburg High football coach Todd McDaniel liked what he saw and heard.

A full house. Loud cheers. A fired-up fan base cheering the Gators on.

It’s a scene McDaniel hopes will be repeated often in the coming years, after Vicksburg enjoyed a breakthrough season that ended with a 14-0 loss to West Point in the MHSAA Class 5A semifinals.

“They came out and supported the kids, and it felt good to hear that roar. Hopefully we’ll be even better. We’re trying to build that pride and tradition back at Vicksburg High and be a beacon of light for the town,” McDaniel said. “Hopefully we’ll find a way to get over this hump. We thought we were going to be able to do it this year. We loved our chances. We just didn’t get it into the end zone.”

Vicksburg reached heights this season it hadn’t climbed to in years. Its 10-3 record marked the first 10-win seasons since 2001, which was also the last time it reached the state semifinals.

The Gators won 10 consecutive games, which was the program’s longest streak since 1993. Their Region 2-5A championship was the first region title since 1990.

McDaniel was thrilled with the progress the Gators have made on his watch — they won 10 games combined from 2018-20 — but also wants this year’s achievements to become the norm rather than associated with the phrase “first time since.”

“I’m extremely happy for the kids. I’m proud of the kids. They did a great job. They had 10 straight wins. Not many people can say that,” he said. “But we’re trying to get to the point where we have 10 or 11 wins every year. That’s our goal. Getting back to this point next year and possibly taking that next step is what we’re shooting for.”

The Gators will need to do a bit of retooling for 2023. A number of key defensive players who have been three-year starters, such as linebacker Wallyeke Curry, defensive end Caleb Bryant, and defensive backs Jeleel Fleming, J.D. Kelly and Nicholas Mickey, are among the graduating seniors on a unit that allowed just 10.8 points per game.

There is plenty of experienced talent returning, however, that should keep the Gators in contention as they adjust to a new region and classification as a member of the MHSAA’s reconfigured Class 6A.

“We have a good group coming back, so we’re just going to have to work our tails off again and get back here,” McDaniel said. “We have almost our entire offense coming back. We’re losing quite a bit off defense, but we have some young guys that have been playing all year stepping up. We’ll coach them up and get them ready to play.”

2
While Vicksburg’s season had a disappointing finish, West Point kept an impressive streak alive with its win Friday in Memorial Stadium.

The Green Wave advanced to their seventh consecutive Class 5A championship game, which is the second-longest streak in the MHSAA’s playoff era that began in 1981.

Only South Panola, which reached nine straight Class 6A championship games from 2002-10, has had a longer streak in any classification. South Panola won seven state titles during its run, and West Point has won four so far.

“It never gets old. It’s always fun,” West Point coach Chris Chambless said. “The fun part is, it’s for the community. Our community supports us. You can see they loaded buses to come here tonight. They’re fantastic.”

West Point (11-2) will play Picayune (14-0) in the Class 5A championship game Friday at 7 p.m. at Southern Miss’ M.M. Roberts Stadium in Hattiesburg.

It’s the third time in four seasons that those teams have played for the 5A title. West Point won in 2019, for the last of its four consecutive state championships. Picayune won in 2021.

3
For the first time in more than two decades, the New Orleans Saints failed to score a point.

The Saints lost 13-0 to the San Francisco 49ers on Sunday to end the NFL’s longest active streak without being shut out at 332 games. New Orleans had the fourth longest streak in NFL history, with its last shutout also coming at the hands of the 49ers in the 2001 finale.

The Saints had several chances to score Sunday. Alvin Kamara lost a fumble inside the 5-yard line, and Will Lutz missed a 48-yard field goal. The Saints’ final possession resulted in a turnover on downs, after they had first-and-goal at the 4-yard line. Nick Bosa sacked quarterback Andy Dalton on fourth down and the 49ers ran out the clock from there.

4
The Saints weren’t the only ones to have a remarkable NFL streak end on Sunday.

Tampa Bay Buccaneers quarterback Tom Brady lost for the first time in his storied career when his team had a lead of at least seven points in the final two minutes of regulation. Brady had been 218-0, including the postseason, in those situations during his 23-year career with New England and Tampa Bay.

The streak ended when the Cleveland Browns scored a game-tying touchdown with 32 seconds left in regulation, and then went on to win 23-17 in overtime. Tampa Bay had the ball twice in overtime, but punted both times. The Browns drove down the field in the closing moments and finished it with Nick Chubb’s 3-yard touchdown run with 19 seconds to go.

Brady’s career record in overtime games fell to 13-5. It ended a seven-game overtime winning streak for him that stretched back to 2015.