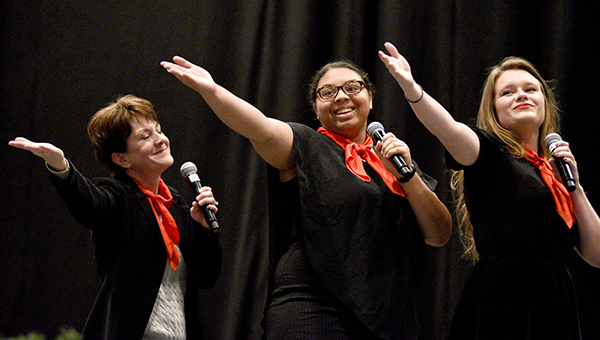 The Jingle Belles perform in the finals of the V105.5 annual Christmas Caroling Contest Saturday evening at the Vicksburg Convention Center Saturday. The group competed in Division 3 and won the Adult Division. (Courtland Wells/The Vicksburg Post)

While the V105.5 Christmas Caroling Contest will not be held live this year, the show will go on.

In lieu of the live performance from vocalists and choral groups, WVBG 105.5 FM and 1490 AM owner Mark Jones said, competitors have been submitting their performances via email, and Wednesday at 5 p.m. marks the deadline for submissions.

What has not changed, however, are the thousands of dollars that will be awarded, with first-place winners taking home a cool grand.

Jones said the reason to forgo the live performance this year was due to COVID-19 concerns.

“I don’t like doing it this way, but things have changed with COVID,” he said, adding that when the date of the competition was being decided — back in August — there were still some concerns about the virus.

As of Tuesday, Jones said he was not certain how many divisions would be included in the competition. He said it would depend on the submissions that are still coming in.

Judging will take place on Dec. 6, and judges will be coming out of the Madison-Jackson area.

“They will not be locals,” Jones said.

Once the winners have been chosen, Jones said, they will be notified that same day.

And as in years past, all performances will be broadcast from the radio station during the holiday season. Jones said he would also air winning performances from previous years.

For those interested in competing, email submission forms and music to christmas@v105.com and remember, Jones said, the deadline is 5 p.m. Wednesday.

The changes in the caroling contest, while different, will present some advantage to performers, Jones said. This year’s competition will truly be a “music contest,” he said.

“The advantage of this competition — it’s always supposed to have been a music contest — but sometimes when you get contestants on stage, appearance gets involved in it, which has nothing to do with music. So, in the past, some have felt they needed to have an entertaining act, but this time it is all going to be judged on music. That’s all we’ve got. So, it’s going to be a more pure contest,” Jones said.