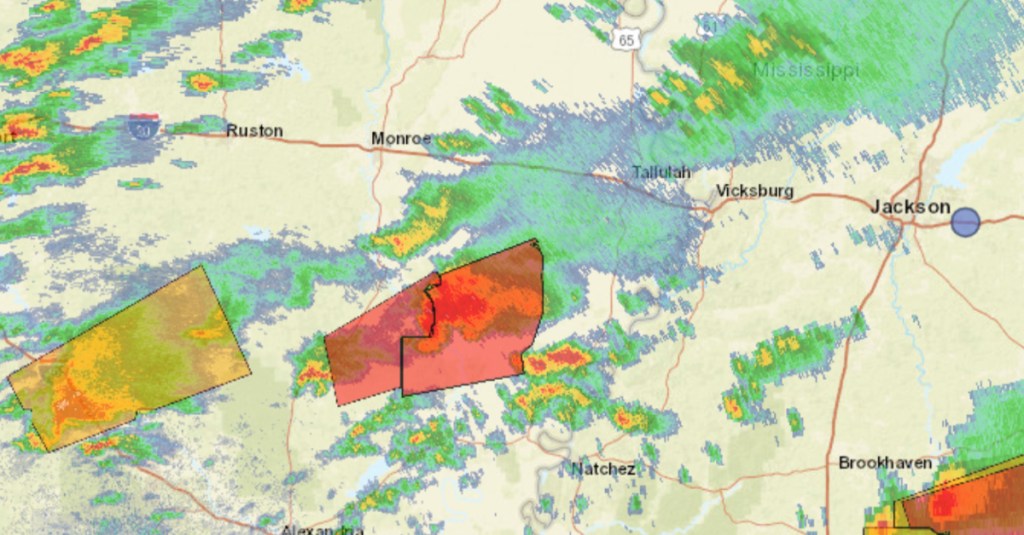 A storm cell southwest of Vicksburg has produced a Tornado Warning and is expected to arrive in the area around 5 p.m. Tuesday. (Source: NWS)

As the Vicksburg area made it through the first part of a predicted severe weather day largely unscathed, the National Weather Service office in Jackson is warning the public of a storm cell in Northeast Louisiana that could hit the area by 5 p.m.

“As of right now, there’s one cell coming through Gilbert, La., that might bump heads with Vicksburg,” said forecaster Lance Perrilloux. “A lot of the supercells and strong storms have been north of Vicksburg.”

The cell he referred to had produced a tornado warning with “quite a bit of rotation.”

Gilbert is located about 75 miles southwest of Vicksburg.

Perrilloux explained that, even with modern technology, it’s still difficult for meteorologists to exactly pinpoint where and when a storm system would arrive. He also pointed out that, approximately 10 to 20 miles north of Warren County, there were two tornadoes reported that could’ve easily struck the area.

“We just want everyone in that area to be prepared for whatever that situation could be,” he said.

Warren County Emergency Management Director John Elfer said there is an additional area of rainfall his office is monitoring that is southwest of Vicksburg.

“We’re not through with it yet,” Elfer said. “People don’t need to get too complacent; there’s a chance these cells could hit us.”

The Vicksburg-Warren County area is still under a Tornado Watch until 7 p.m. Tuesday. The severe weather threat across Central Mississippi is expected to continue until at least midnight.