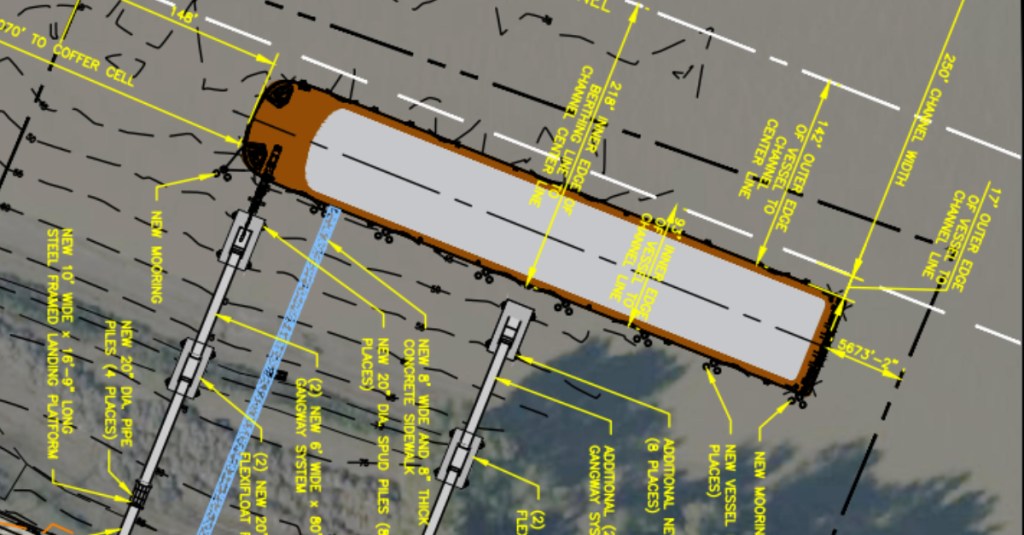 A portion of the document presented by Viking to the U.S. Army Corps of Engineers for a permit to construct a docking facility at the Vicksburg Riverfront. (Photo Submitted)

Viking USA LLC is seeking a permit from the U.S. Army Corps of Engineers to build a dock at the Vicksburg riverfront on the Yazoo River Diversion Canal.

According to a notice for comment issued by the Corps’ Vicksburg Division, the purpose of the project is to provide “embarkation/disembarkation access” for Viking’s river cruise boat passengers at the waterfront along Levee Street for excursions in the area.

Plans for the docking system include:

• A 290-foot concrete sidewalk along the riverbank for access during low water stages.

• A 262-foot by 20-foot, elevated gangway with one fixed landing platform and two floating platforms for passenger access.

• A 282-foot by 20-foot elevated gangway with one fixed pier and two floating platforms for supplies and waste removal.

• A pedestrian railway crossing and utility extensions on Levee Street.

According to the notice, Viking proposes to dock a vessel at the facility once a week for eight to 10 hours, and possibly overnight if the boat is unable to leave “for some unforeseen reason.”

Viking Cruise Lines was the first of the three river cruise lines that stop in Vicksburg to lease a site on the riverfront, leasing a 600-foot section of riverfront along the Yazoo Diversion Canal behind the Yazoo & Mississippi Valley Railroad Depot on Levee Street to build a facility for its cruise boats. Viking will build the dock.

The Vicksburg Board of Mayor and Aldermen in November 2020 approved a 20-year ground lease with Viking USA at a rate of $1 per passenger to use the site.

American Cruise Lines in May announced it was subleasing its 500-foot section of waterfront adjacent to Viking’s site.

At the time, a Viking spokesman said the cruise line’s landing was not going to be developed “for some time” and work at the site depended on the water stage.

“It’s tough to get into our landing, so we sent out a request to (American Cruise Lines) for permission to land, at least for a certain date,” the spokesman said.