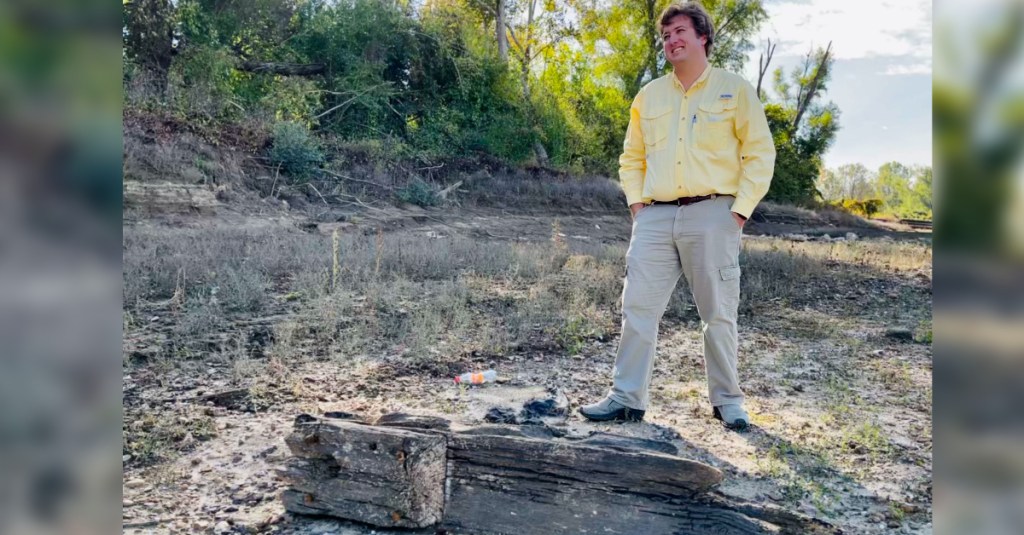 USACE Vicksburg District archeologist Kad Henderson stands in front of the keel of a shipwreck site on the Yazoo Canal in Vicksburg, Mississippi. Low water revealed the wreck, however, recent rainfall left only a piece of the keel visible. (USACE photo by Anna Owens)

In mid-October, a local fisherman on the Yazoo Canal north of Vicksburg stumbled upon a piece of history usually concealed by rippling muddy water.

A 1920s-era vessel lay in the mud of the canal bed half exposed to open air. The find was made possible due to low water caused by drought conditions on the Mississippi River and its tributaries, which swerve around Vicksburg on the way down to its endpoint in the Gulf of Mexico.

The fisherman contacted the Mississippi Department of Archives and History to put the wreck on its radar. While the state controls the wreck, archeologist Kad Henderson, with the U.S. Army Corps of Engineers (USACE) Vicksburg District’s Regulatory Division, stepped in to identify the remains.

As one of the few maritime archeologists in the state, Henderson’s expertise came in handy during the initial site visit. The wooden vessel’s stern was partially exposed, and its small but heavily-built construction led Henderson to believe it was a tugboat.

The reason behind the tugboat’s final resting place was perhaps more debatable. Wooden vessels were impossible to salvage after long periods of use, Henderson explained, so many during that time period were steered into the bank and abandoned as a means of disposal. Nevertheless, those abandoned sites sometimes served a later purpose, however unintentional.

“Sometimes abandoned wrecks are used as breakwaters. I’ve even seen piers built on top of them, or sometimes they’re used to stop bank erosion,” Henderson said.

Key identification evidence included the tugboat’s large exposed propellor shaft. Rust coated the interior, and marks of extensive wear and tear pointed to either advanced age or heavy usage. However, Henderson also noticed that the frame, or “ribs” of the tugboat, had concrete between them — a detail he’d seen before in both 1920s-era fishing boats and 17th-century Spanish warships.

Shipbuilders poured concrete into what would otherwise be empty space to add weight to the hull, or bottom of the ship. Although concrete holds moisture which accelerates rot, the practice was primarily used for cheap ships that were therefore disposable.

All told, the evidence indicated the tugboat wasn’t a famous wreck, but a peek into past maritime practices: frequently used and then discarded, perhaps for another model. As one would expect, the vessel retirement process is much more regulated today.

“There weren’t many details that could give us a hard date on when it was built other than that it post-dated the construction of the canal,” Henderson said. “The shipbuilding techniques were generic, plus the parts of the ship that were more datable were buried.”

He estimated that the tugboat was between 75 to 100 feet long based on how the rest of the vessel was submerged.

Henderson plans to complete cursory documentation on the tugboat based on his site visit findings. Currently, there are no plans to excavate the wreck due to its commonality. Henderson explained that excavations usually only take place if there is known historical significance. They are also extremely expensive.

“The best way to preserve a vessel is to leave it buried,” he said. “Excavating the tugboat would have a detrimental effect as it’s best for the timbers to stay in wet conditions. If this wreck had been in salt water, it would’ve disintegrated almost the second it hit the air. Freshwater helps preserve it to an extent.”

Now that water levels have risen with recent rainfall, the wreck is mostly under the surface again. On a Nov. 22 site visit, Henderson noted a lone, sturdy timber remained above the water line: a piece of the keel.

A maritime archeologist by trade, Henderson lent his expertise to various firms and sites across 16 states before coming to the district in July 2021. His position primarily concerns reviewing all permits issued by the Regulatory Division for archeological or cultural interests.

Prior to joining the district, Henderson worked on USACE’s Central Everglades Restoration Project in south Florida in 2014. He gathered data from numerous remote sites to establish an environmental baseline for what the area would have been like 3,000 to 4,000 years ago.

A native of Pensacola, Fla., Henderson spent time in undergrad exploring artifacts from a 17th-century Spanish warship, among other sites.