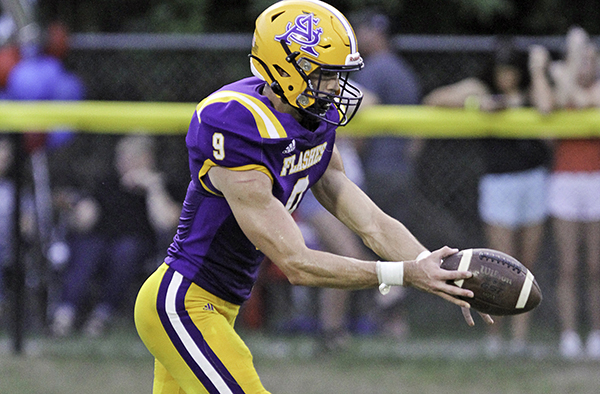 As the season progressed, Jake Brister became less of a football player and more of an urban legend around the Mid-South Association of Independent Schools.

Tall tales of his booming punts spread among fans and foes alike. The sound of his foot hitting the ball was mistaken for thunder, the football itself picked up on radar at nearby airports.

“We show up at a visiting stadium, and even the visiting crowd would start to huddle around the fence. It was almost like their kids had gone home and talked about this kicker, to where he was kind of becoming a cult hero around our district,” St. Al coach Bubba Nettles said with a laugh.

The funny thing, though, is that those stories are true. Brister averaged 49.9 yards per punt this season, a number that seems like it could have been more if only the field were a bit longer.

“At Cathedral he was on the 50 and punting them through the end zone, over the fence and into the parking lot,” Nettles said. “The parents who were sitting out there tailgating or whatever started to realize it, and next thing you know they’re lined all along the fence watching it. That was a very unique experience.”

Brister will get one more chance to show what he can do Friday, when he plays in the MAIS 4A-5A-6A All-Star Game at 6 p.m. at Jackson Prep.

Although the Flashes finished 1-9 this season, Brister’s reputation earned him a spot on the White team’s roster.

“I’m excited because I went into the season and that was one of my top three goals. I wanted to do it last year and I didn’t get it, so I told myself I was going to do it this year,” Brister said. “I thought it would be hard. Obviously being 1-9 and coming from a smaller school. But I think a lot of coaches saw me punt, and I saw it coming just by the way coaches were reacting.”

Brister played some wide receiver and tight end for the Flashes, but made his mark as the team’s punter. Besides his impressive average, he had 13 punts downed inside the 20-yard line and six downed inside 10.

If he had one weakness, it was that he was too good. He often outkicked his coverage.

“It got to the point where he would punt it 70 yards and it would be returned 40,” Nettles said. “I’d tell him, ‘I’m not going to tell you to punt it as far. But if you’re going to punt it that far and down the middle of the field I’m going to need you to also go make the tackle.”

Brister started kicking a couple of years ago. Once he found he had a talent for it, he went to a camp in Jackson that changed the trajectory of his football future.

He met former Warren Central and Mississippi State punter Devon Bell, who now works with high school kickers and punters in Central Mississippi. Brister started taking weekly lessons and credits Bell with turning him from just a big leg into a skilled punter.

“I went to a camp in Jackson just to go. I wasn’t expecting anything. Devon Bell saw me and saw potential in me. We started working together and I just saw the progression immediately,” Brister said. “He told me I could be a big asset at the college level and that made me work hard. Ever since then I’ve been progresing, working on my own, driving two hours to work with Devon on the weekends, and it’s really paid off.”

The All-Star Game could be one of many postseason accolades for Brister. He is being recruited by several Division I football programs as well as Mississippi’s junior colleges and expects to sign with one of them in February.

“I’m still talking to coaches. They’ve been coming in more and more, I guess as my name has gotten out. I’m still not sure where I’m going to go,” Brister said.

While the all-star game could be a showcase event, Brister added that he’s mostly planning to soak up the atmosphere and enjoy representing St. Al one last time.

“I’m excited just to meet with other players and to play with the best of the best. And obviously I want to do good, so I’m excited about that too,” he said. “I’m proud to play at St. Al, so it feels good to represent my school with the All-Star Game.”

Brister is not the only local player who will participate in the MAIS’ two-day football all-star festival. Nettles, will be an assistant coach for the White team in the 4A-5A-6A game.

“To be able to experience this together, for the first time for both of us, is absolutely icing on the cake,” Nettles said.

The Class 1A-2A-3A game is Friday at 3 p.m., at Jackson Prep. Porter’s Chapel Academy kicker Daniel Llopis and lineman Maureon Simms were selected to play for the White team.

Tallulah Academy lineman Colton Cone will play for the White team, while his teammates Judd Dennis, Kody Vickery, Wyatt Bedgood and Dee Morgan will suit up for the Blue. Dennis is a linebacker, Vickery a lineman, and Bedgood a running back. Morgan plays both quarterback and linebacker.

Tallulah Academy coach Bart Wood will also be an assistant for the Blue squad.

Central Hinds wide receiver/defensive back Sam McCoy will play, and coach Lance Teasley will be an assistant, in the Futures game Thursday at 6 p.m. at Madison-Ridgeland Academy.