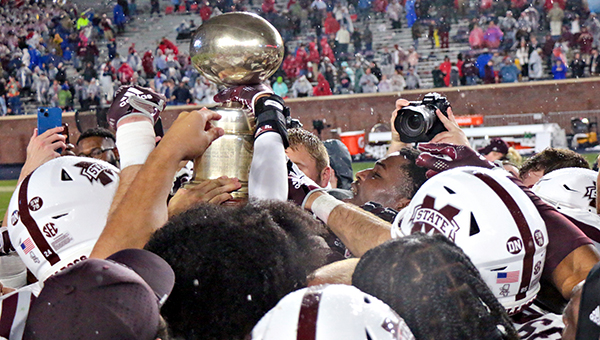 Mississippi State fans will get a chance to celebrate their football team’s Egg Bowl win Thursday in Vicksburg.

The Golden Egg trophy, which Mississippi State claimed with its 24-22 win over Ole Miss on Thanksgiving, will be on display Thursday from 11 a.m. to 1 p.m. at Alfa Insurance’s Stuart Agency at 1980 South Frontage Rd.

Fans can stop by and have their picture taken with the trophy and with Mississippi State’s mascot Bully. Cookies and refreshments will also be served.

The stop in Vicksburg is part of a statewide tour put on by Mississippi State’s athletics department. The Golden Egg Tour started last Saturday in Jackson and will include 11 stops in more than a dozen cities in 10 days. Some season ticketholders in select cities also received surprise home visits from Bully and the Golden Egg.

“We’ve got an MSU Christmas tree set up and some cute little surprises for people to look at. We’re excited,” said Amanda Ross, associate agent with Alfa Insurance’s Stuart Agency.