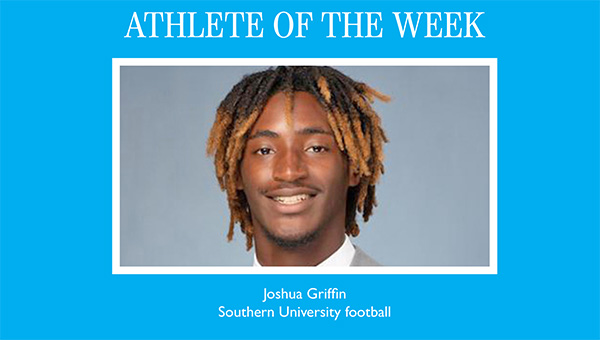 Joshua Griffin put the “foot” in “football” this season and is the latest winner of The Vicksburg Post’s Athlete of the Week award.

Griffin, a sophomore kicker for Southern University’s football team, received 419 of 672 votes in an online poll by The Vicksburg Post’s readers asking them to pick this season’s top college football player from Warren County.

Griffin was a standout at Warren Central before moving on the Southern. He made 33 of 36 PATS, and 5 of 8 field goals this season, while helping the Jaguars win the Southwestern Athletic Conference West Division championship.

Griffin also had 30 touchbacks on 64 kickoffs. He was named the SWAC Special Teams Player of the Week following a win over Prairie View A&M in October.

Southern will play at Jackson State in the SWAC championship game Saturday at 3 p.m. The game will be televised on ESPN2.

Congratulations to Joshua and the other nominees, and thank you to our readers for voting.