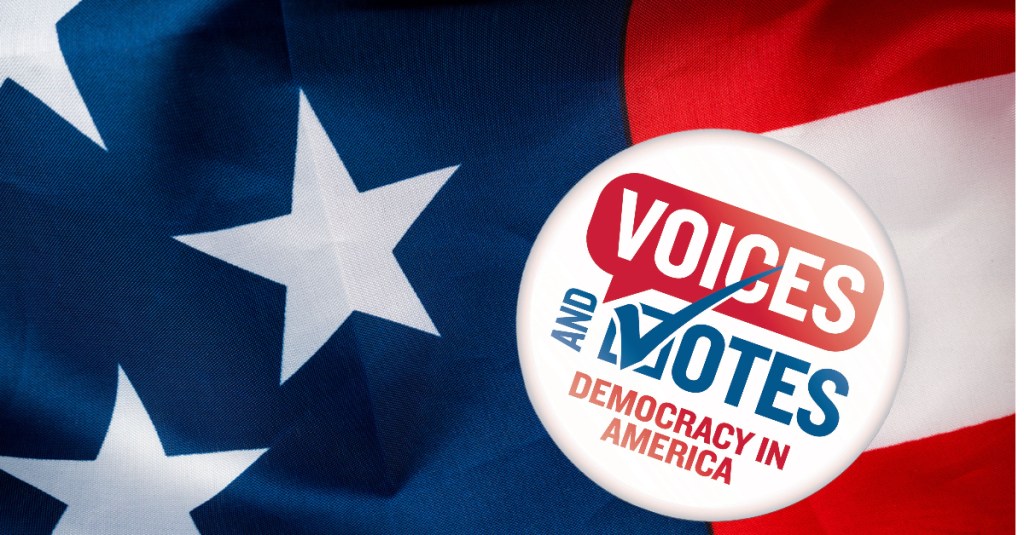 Two events in Vicksburg this week, presented in conjunction with the Smithsonian Voices and Votes exhibit at Catfish Row Museum, will focus on the importance of voting and illuminate the voting process in Warren County.

Mississippi state Sens. Briggs Hopson and Derrick Simmons will speak on a panel called Democracy on Tap Wednesday night from 5:30 to 6:30 p.m. at Key City Brewery. Hosted by Stuart Rockoff, executive director of the Mississippi Humanities Council, the discussion will center on the theme, “Your voice, your vote and why it matters.”

As moderator, Rockoff will lead the panel through the role of citizens in a democracy and the rights of citizens to protest and petition the government, as well as how Mississippi’s history of restricting voting rights, such as the 1890 state constitution, have shaped these issues.

“We had the lowest turnout rate of any state in the [2022 midterm] election,” Rockoff says, when just 31 percent of eligible voters in Mississippi cast a ballot. “What factors explain that? How can we improve?”

Access to voting in Mississippi, as well as how to encourage citizens to vote, will also be on the agenda.

This Saturday, Dec. 3 at 2 p.m., Sara Dionne, chairwoman of the Warren County Election Commission, and Jan Daigre, Circuit Clerk, will discuss the voting process in the county, including registration, requirements and voter roll maintenance at Catfish Row Museum in Vicksburg.

After covering a brief history of the voting equipment that was used in Warren County over the last 50 years, the pair will demonstrate the current voting process, which combines paper and electronic ballot counting. All precincts in the county now have the new machines, which replaced computerized machines, and attendees will be able to practice casting a ballot.

“There is a perception that those computerized machines are perhaps not as accurate as people would like, (but) I have never found that to be true, certainly here in Warren County,” Dionne said. “But that’s the perception, and so we have switched back to a paper-based system.”

In the new process, voters receive a paper ballot at the polls and take it to a booth where they fill in the bubble next to their candidate of choice. Then, they feed the paper ballot into the scanner to be counted. In the event of an election challenge, commission officials have paper ballots they can recount to verify the scanners’ results.

None of the voting equipment is connected to the internet, though, Dionne says, and they do not have WiFi capability. Each stand-alone scanner has internal memory, as well as USB backup, which officials use for recording and tracking votes.

“Here in Warren County, we have very fair and honest elections, [and] we are very, very determined to follow the law and to do our job correctly,” she said.

The Smithsonian-curated “Voices and Votes: Democracy in America,” which opened Nov. 14 at Catfish Row Museum, brings clarity to the struggles at the heart of the ballot process. The exhibit is based on the National Museum of American History’s broader “American Democracy: A Great Leap of Faith” exposition.

The speakers series in support of Voices and Votes will also feature fashion designer Raymond Banks, who will speak on the intersection of fashion and politics on Dec. 10; Donald Field Brown, a Harvard University scholar, who will speak on the history of the Vicksburg Citizens’ Appeal and its prominence at the height of the Civil Rights Movement on Dec. 20; and Dr. Rebecca Tuuri, a professor at USM, who will deliver a presentation on democracy in Mississippi on Jan. 4.