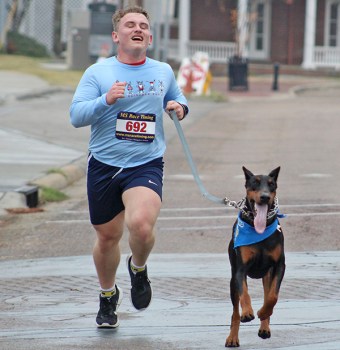 Peyton Davidson and his dog run toward the finish line Saturday at the Reindeer Run 5K in downtown Vicksburg. (Ernest Bowker/The Vicksburg Post) 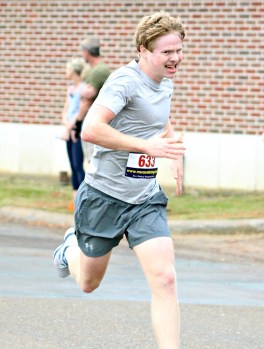 Matthew Brewer sprints toward the finish line and victory Saturday in the Reindeer Run 5K. Brewer won the 5K run with a time of 19 minutes, 28 seconds. (Ernest Bowker/The Vicksburg Post) 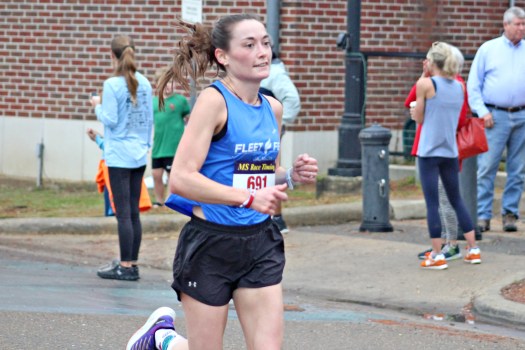 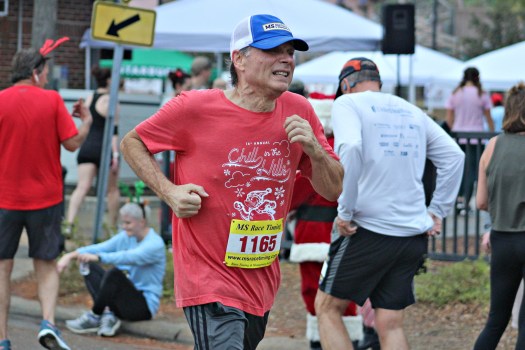 Ron Roma heads toward the finish line Saturday at the Reindeer Run 5K in downtown Vicksburg. Roma won the 5K race walk with a time of 34:11. (Ernest Bowker/The Vicksburg Post) 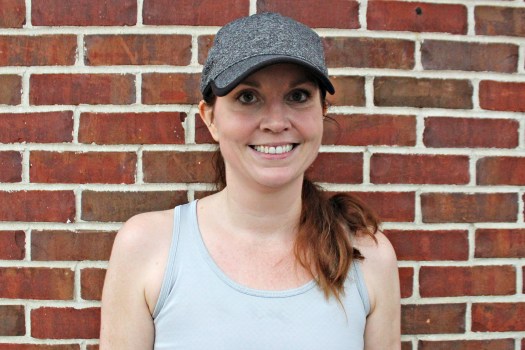 Lucy Priddy won the women's 5K walk championship at the Reindeer Run 5K on Saturday, with a time of 36:22. (Ernest Bowker/The Vicksburg Post) 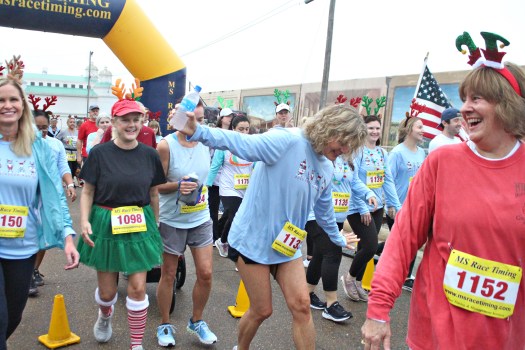 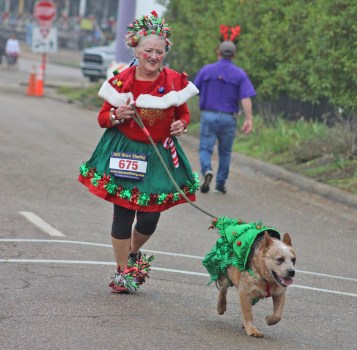 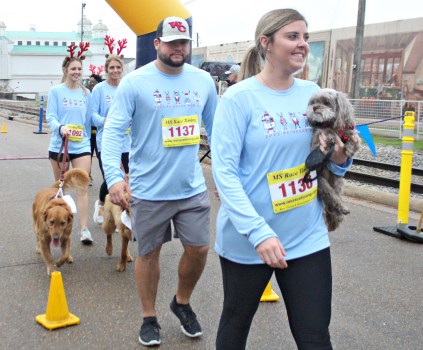 Kayla and Colby Rushing, along with their dog, start the Reindeer Run 5K race walk on Saturday. The Reindeer Run is a fundraiser for Paws Rescue. Participants are invited to run or walk with their dogs, and a pet parade is included in the postrace festivities. (Ernest Bowker/The Vicksburg Post) 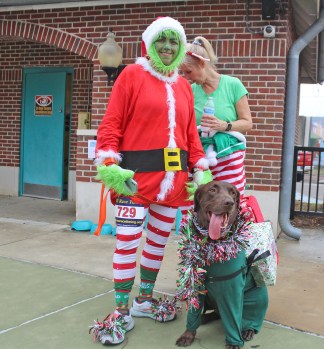 Bonny East and Rusty pose for a photo at the Reindeer Run 5K on Saturday. (Ernest Bowker/The Vicksburg Post)

Christmas carols and barks filled the air at this party. Milk-Bones were the snack of choice. Some of the participants sniffed each other.

In other words, it was once again the first Saturday in December in downtown Vicksburg.

Nearly 150 runners and walkers hit Levee Street and the downtown hills for the Fourth Annual Reindeer Run 5K. The laid-back race is a fundraiser for Paws Rescue, and the postrace pet parade featuring dogs — some of whom had conquered the course with their owners, and many dressed in costumes — was as much a spectacle as the race itself.

“It’s such a great cause, and look at the great party that’s going on around us. This is a fun race,” said Lucy Priddy, who won the women’s 5K race walk with a time of 36 minutes, 22 seconds.
Priddy finished third overall in the walk, behind overall winner Ron Roma and Steve Pranger. Roma clocked a time of 34:11 and Pranger 35:45.

“Andrew got ahead of me about halfway through the race. Then he got a little hot and had to strip some layers, and I was able to pass him and it was my own little race for the next mile and a half,” Priddy said.

In the 5K run, 16-year-old Vicksburg resident Matthew Brewer smoked the field with a time of 19:28. Samuel Terrett finished second in 22 minutes even.

“About a mile in was when I really separated,” Brewer said. “I started out pretty slippery. That’s never good. A few of the sharp corners I lost my footing a little bit. Other than that it was good and smooth.”

Kelsey Shumate was third overall, and the women’s winner, in 22:04. She finished nearly two minutes ahead of runner-up Laura Jimenez, who was seventh overall in 23:46.

It was the first time Shumate, a Clinton resident, had participated in the Reindeer Run.

“I wanted to do a Christmas race and this one looked fun. It’s for the dogs and the shirts looked cute. That’s always a good reason to a do a race,” Shumate said with a laugh. “The hills are also fun here. I don’t get a lot of them at home. When I come here it’s always fun to get the zippity-zoop of the hills.”

Harper, a pug dressed as an elf, won the pet parade and a gift basket filled with dog treats. Harper declined to comment on his victory.