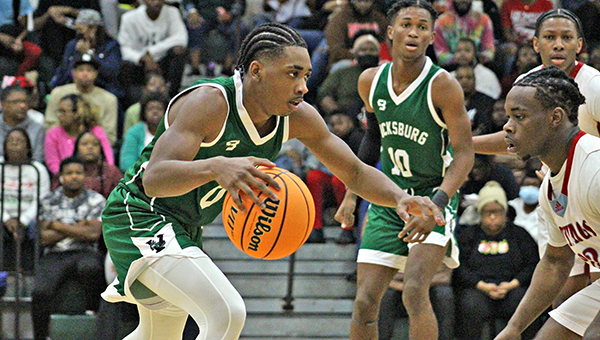 Vicksburg's Davian Williams dribbles the basketball Saturday against Warren Central. Williams made three 3-pointers in the final minute of the first half to key a big run that propelled the Gators to a 73-64 victory. (Ernest Bowker/The Vicksburg Post) 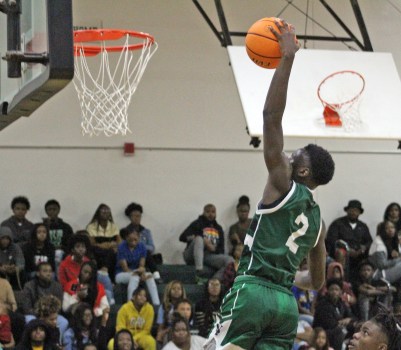 Vicksburg's Malik Franklin flies in for a dunk in the fourth quarter of Saturday's game against Warren Central. Franklin scored 18 points to lead the Gators to a 73-64 victory. (Ernest Bowker/The Vicksburg Post) 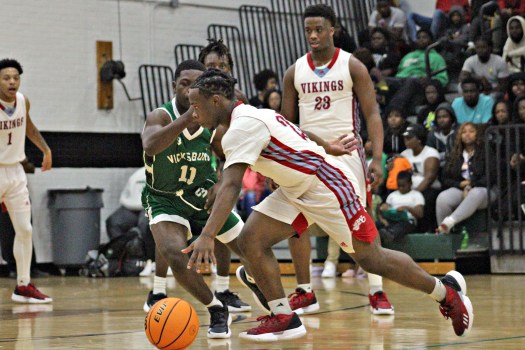 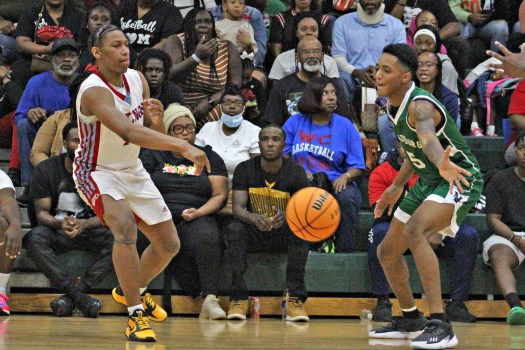 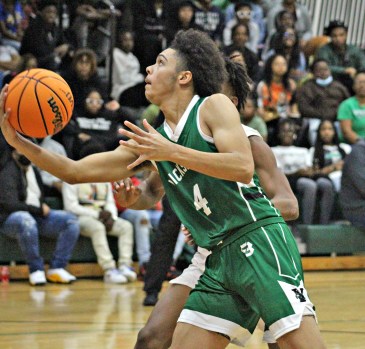 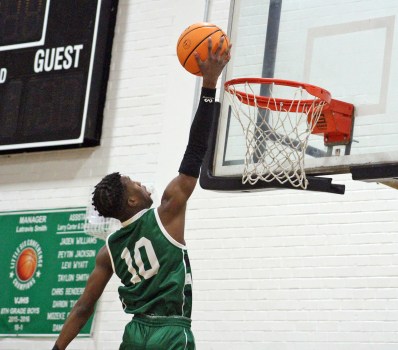 The Vicksburg Gators were already having a good season when they were undermanned. Now they’re at full strength, and starting to think this season could be much more than just “good.”

The Gators beat Warren Central 73-64 on Saturday, for their seventh win in the last eight meetings with their crosstown rival. They swept the season series.

The more impressive number, though, is the 10-0 record they’ve compiled to this point despite missing several key players who are just now returning from the football team.

“It’s been a blessing, because seven of those games we did with six guys. That was really, really big. I’m excited,” Vicksburg coach Kelvin Carter said. “This is a high ceiling for this team. These guys are young. I only have two seniors. The future looks bright.”

One of those young guys, junior Davian Williams, got the Gators rolling on Saturday. He made three 3-pointers in the final minute of the first half to key an 11-3 run heading into the break.

Then, in the first 2 1/2 minutes of the third quarter, the Gators went on another 10-0 run to take a 41-27 lead. Warren Central stopped the bleeding there and never let the game get out of hand, but it also did not lead again.
Warren Central’s only points during what wound up being a 21-3 surge by Vicksburg was a half-court buzzer-beater by Gaylon Turner to end the second quarter.

“For some reason we got rattled with the little press they put in. We were prepared for it. We’ve been down before and come back,” Warren Central coach Keith Williams said. “Where we made mistakes, they didn’t. We got away from what we were trying to do and started playing a little bit out of control.”

The Vikings did themselves no favors, either, by making only 13 of 29 free throws. They were 5-for-13 in the fourth quarter.

“We couldn’t make free throws. We missed them and they made them,” Keith Williams said.

Davian Williams finished with 19 points for Vicksburg, Tyler Henderson scored 12 and Kealon Bass eight. Senior guard Malik Franklin had 14 of his 18 points in the second half.

Lazaveon Sylvester led Warren Central (3-5) with a game-high 23 points, including 12 in the fourth quarter. Turner scored 10 points and Padre Gray had eight.

Franklin’s performance in the second half helped keep Warren Central at bay. The Vikings got as close as five points late in the third quarter, and were within seven in the final minute before the Gators held on.

“That’s how it is,” he said. “When Warren Central and Vicksburg play, it’s going to be something to watch.”

Four players scored at least nine points each, led by Carson Henderson with 13. Ahmad Stewart had 11, and Korey Sims and Antley McLeod totaled nine apiece. St. Al jumped out to a 19-4 lead at the end of the first quarter and never trailed.