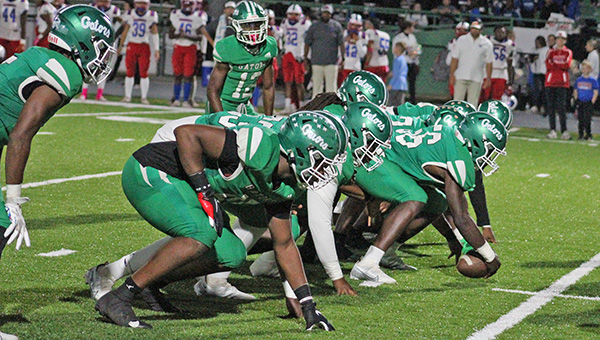 Vicksburg High's offense prepares to run a play this season. The Gators' 2023 schedule includes five games against opponents within a 90-minute drive, two long road trips in Region 2-6A, and a new date for their annual rivalry game vs. Warren Central. (Ernest Bowker/The Vicksburg Post)

In just his second game as Vicksburg High’s coach, Todd McDaniel said he made a mistake he did not want to repeat.

“The worst thing I did was go down to Biloxi my first year,” he said with a laugh. “That was a four-hour ride one way. I made it home about 4:30 or 5 o’clock that morning.”

When it came time to compile Vicksburg’s 2023-24 football schedule, it was an experience that McDaniel made sure he and his players didn’t endure again.

All five of Vicksburg’s non-region opponents are within about an hour’s drive. With two long road trips on the Region 2-6A schedule, he said it helped create a more manageable slate.

“We tried to get schools that play pretty good football right here in the area,” McDaniel said. “We’ve got to travel 200 miles to play a district game. We pass all these 6A schools to go to Columbus. But it is what it is. I was happy with the non-conference schedule.”

The Gators will have plenty of familiar opponents on the schedule as well. Six teams that were on the 2022 return in 2023.

The season begins Aug. 25, at home in the Red Carpet Bowl vs. Holmes County Central. Another home game vs. Forest Hill follows on Sept. 1. Both teams were region opponents in 2022, but are non-region contests in 2023.

The next three weeks, however, bring a fresh look. The Gators take road trips to Natchez and Terry before hosting Yazoo City for homecoming on Sept. 22.

Vicksburg has played Natchez and Terry in spring games and jamborees the past couple of years, but not in the regular season. It has not played Yazoo City since a home-and-home series in 2015 and 2016.

“Nothing really changes other than Terry or Yazoo City, and we played Terry in the spring this past year,” McDaniel said.

Vicksburg’s open date is Sept. 29, and then it jumps into Region 2-6A play on Oct. 6 at Neshoba Central.
Another road game at Warren Central follows on Oct. 13, and two of the last three games are at home — vs. Callaway on Oct. 20 and Ridgeland on Nov. 2. Vicksburg also takes a long trip to Columbus on Oct. 27.

Four of the six teams in Region 2-6A won at least one playoff game this season. McDaniel, however, said the landscape of the reconfigured Class 6A — which is now a mash-up of former Class 5A and 6A teams, after the MHSAA added a seventh classification beginning in 2023 — might be different than what people are accustomed to.

“When you really look at 6A North, it’s wide open again. You don’t have the West Point that has won 5A North for the past eight years,” McDaniel said. “This is brand new territory for us. We’ve got to see who’s going to be the dominant team.”

One big change will be the placement of the annual River City Rivalry game against Warren Central.

For the past 10 years, when it was a non-region game, it was played in Week 2. Prior to that, it was the regular-season finale. This will be the first time since 1990 that the Gators and Vikings have faced each other in mid-October.

Vicksburg’s 2024 schedule will be the same as 2023, except the home and away venues will flip and its Red Carpet Bowl opponent will change.