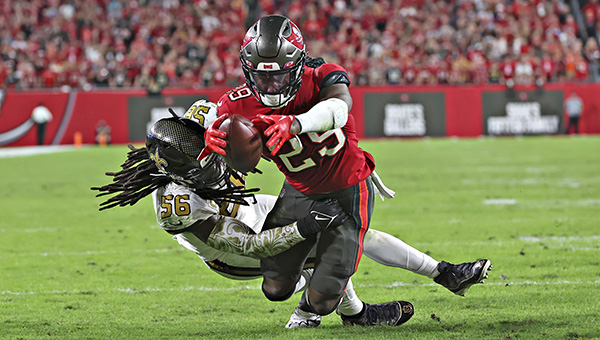 TAMPA, Fla, (AP) — The New Orleans Saints were five minutes away from moving within a half-game of NFC South-leading Tampa Bay when the bottom fell out of the game, and most likely the season.

Tom Brady threw a pair of touchdown passes in the final three minutes Monday night — the last with three seconds remaining — as the Buccaneers rallied from a 13-point deficit to beat the Saints 17-16.

“It’s frustrating to not come out with the win when you’re up 16-3 in the fourth and you lose,” Saints defensive end Cameron Jordan said. “That’s sort of been the story of the year, and that’s not winning football.”

The loss guarantees a losing season for the Saints (4-9), while Tampa Bay (6-6) tops the division.

Brady tossed a one-yard TD pass to rookie Cade Otton, finishing a 91-yard drive to pull within 16-10 with three minutes remaining. He got the ball back with 2:29 to go and won it with a 6-yard scoring pass to Rachaad White with three seconds left.

“It makes it tough because I felt like we had an opportunity really to win this game,” New Orleans coach Dennis Allen said. “And we didn’t finish, and we didn’t get it done.”

Andy Dalton threw for 229 yards and a touchdown without an interception for New Orleans, but the Saints failed to take advantage of opportunities to put the score out of reach by settling for three short field goals.

“There’s only four games left and it’s unfortunate that we keep having to say the same thing over and over again,” Dalton said. “The missed opportunities have hurt us. We’ve had chances in a lot of games this year. We haven’t made plays when we needed to. It has affected the game and it’s been the same outcome.”

Dalton threw an incomplete pass intended for Marquez Callaway on a 3rd-on-1 at the Tampa Bay 44 with the Saints up 13 and 5:34 to play.

The Saints have scored one touchdown in their last two games.