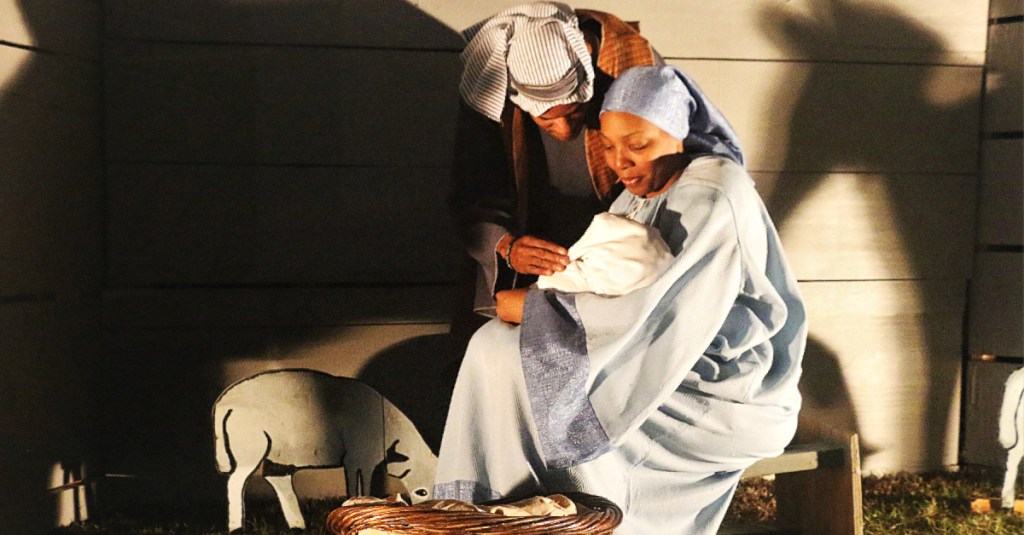 Rufus and Tiffany Jennings played the roles of Mary and Joseph, with baby Jesus in the stable during the King Solomon Baptist Church drive-thru nativity event. (Photo by Terri Cowart Frazier | The Vicksburg Post)

“And this shall be a sign unto you; Ye shall find the babe wrapped in swaddling clothes, lying in a manger.” Luke 2:12 (KJV)

The drive-thru event was held on the church grounds and passersby had the opportunity to view scenes created to replicate Christ’s birth story as told in the Bible.

The first scene was of Joseph and Mary, who was with child and riding on a donkey. Church members recreating the scene were Amari Caples and Joshua Jennings. 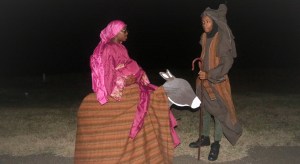 Amari Caples and Joshua Jennings act out the roles of Mary and Joseph traveling by donkey to Bethlehem prior to the birth of Jesus. (Photo by Terri Cowart Frazier | The Vicksburg Post)

“And Joseph also went up from Galilee, out of the city of Nazareth, into Judaea, unto the city of David, which is called Bethlehem; (because he was of the house and lineage of David) to be taxed with Mary his espoused wife, being great with child.” Luke 2:1-4 (KJV)

The second scene was of shepherds tending sheep and a Heavenly Host of angels. This scene was comprised of several members of the congregation. 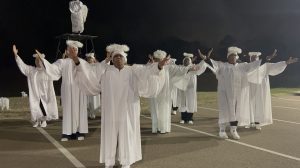 The Heavenly Host, portrayed by members of King Solomon Baptist Church, sang praises to God at the birth of Jesus Christ, alerting the Shepherds to worship. (Photo by Anna Guizerix | The Vicksburg Post)

“And there were in the same country shepherds abiding in the field, keeping watch over their flock by night. And, lo, the angel of the Lord came upon them, and the glory of the Lord shone round about them: and they were sore afraid. And the angel said unto them, ‘Fear not: for, behold, I bring you good tidings of great joy, which shall be to all people. For unto you is born this day in the city of David a Savior, which is Christ the Lord. And this shall be a sign unto you; Ye shall find the babe wrapped in swaddling clothes, lying in a manger.’ And suddenly there was with the angel a multitude of the heavenly host praising God, and saying, ‘Glory to God in the highest, and on earth peace, good will toward men.’” Luke 2: 8-14 (KJV)

The third scene was of the three wise men, who were portrayed by Sullivan L. Caldwell, Charles Vessel and Cirkelon Thompson. 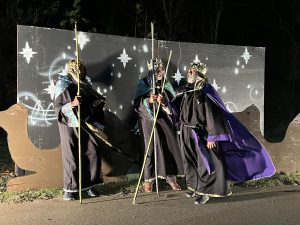 Sullivan L. Caldwell, Charles Vessel and Cirkelon Thompson, the three wise men, shared wisecracks as they discussed whether or not to return to King Herod after laying gifts at baby Jesus’ feet. (Photo by Anna Guizerix | The Vicksburg Post)

“When they saw the star, they rejoiced with exceeding great joy. And when they were come into the house, they saw the young child with Mary his mother, and fell down, and worshipped him: and when they had opened their treasures, they presented unto him gifts; gold, and frankincense and myrrh.” Matthew 2:10-11(KJV)

The fourth scene of Mary, Joseph and baby Jesus in the stable was portrayed by Tiffany and Rufus Jennings. 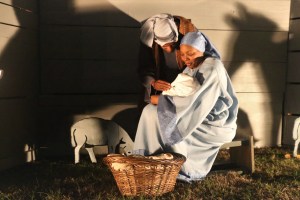 Rufus and Tiffany Jennings played the roles of Mary and Joseph, with baby Jesus in the stable during the King Solomon Baptist Church drive-thru nativity event. (Photo by Terri Cowart Frazier | The Vicksburg Post)

“And she brought forth her firstborn son, and wrapped him in swaddling clothes, and laid him in a manger; because there was no room for them in the inn.” Luke 2:7 (KJV)