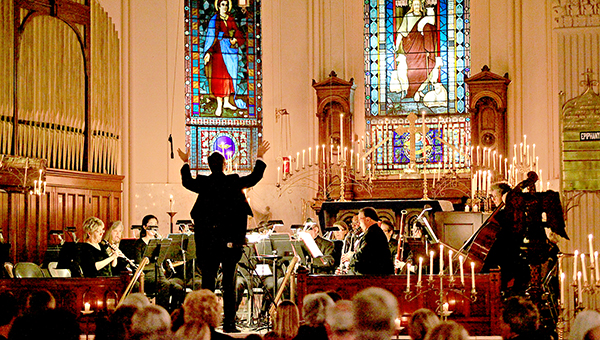 With more than 600 works spanning many genres, Wolfgang Amadeus Mozart was a prolific composer, and one of the Austrian composer’s most recognizable compositions is the “Overture to The Marriage of Figaro K. 492 (1786).”

Beginning at 7 p.m. Sunday, classical music enthusiasts will have the opportunity to enjoy the iconic piece by Mozart, along with a repertoire of other selections, as the Mississippi Symphony Orchestra, under the direction of Maestro Crafton Beck, presents the annual Mozart by Candlelight concert at the Church of the Holy Trinity, 900 South St.

Held in Vicksburg for almost 20 years, “This concert is something the community looks forward to and are always asking, ‘When is the Mozart concert coming,” Dorothy Brasfield said.

Brasfield serves as the director of the board for the Four Seasons of the Arts, the group that sponsors the event.

With lights dimmed and candles burning, concert-goers can also enjoy musical selections that include, the three movements of Mozart’s Sinfonia Concertante for Violin and Viola, in Eb K. 364.

Performing as the featured violinist and violist are Shellie Brown Kemp and Ausra Jasineviciute, respectively.

Kemp, Brasfield said, grew up in Mississippi and has “come up through the string program in the Jackson Public Schools, which is sponsored by the MSO.”

The MSO will also perform Symphony No. 35 K. 385 in D, “Haffner,” and its four movements following the intermission.

The Mozart by Candlelight concert is free, but donations are encouraged.