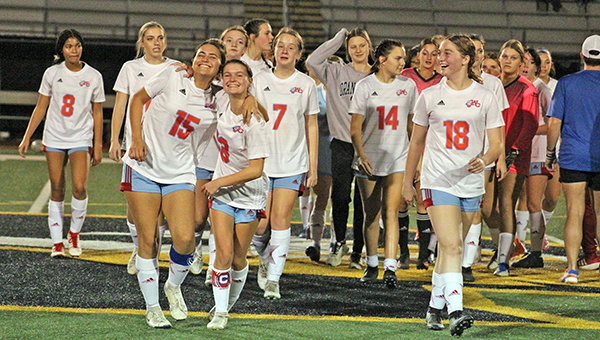 Warren Central's girls' soccer team walks off the field following an 8-0 loss to Northwest Rankin on Tuesday. The Lady Vikes will travel to St. Martin for the first round of the MHSAA Class 6A playoffs on Jan. 24. (Ernest Bowker/The Vicksburg Post) 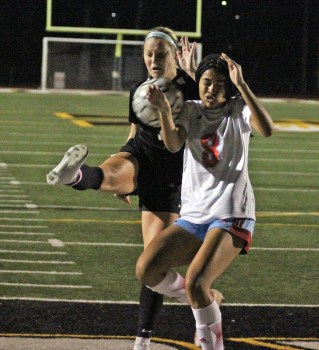 FLOWOOD — Warren Central will face St. Martin in the first round of the MHSAA Class 6A girls’ soccer playoffs.

It’s not an easy assignment, but playing the game is only part of the challenge. From the long road trip to figuring out how to generate some consistency, coach Jeremy Lawrence said handling the mental side of things will be as important as executing on the field.

“Every Coast team is good. It’s not a question of how good they are, it’s a question of how good will we be? If we are as good as we can be and we compete, then we’ll do well,” Lawrence said. “That’s really what we’re triyng to do, is find that consistency back after this. My focus for the next three days is can I find that magic or that consistency?”

The Lady Vikes (5-11, 2-4 MHSAA Region 5-6A) had an up-and-down regular season that ended with an 8-0 loss to Northwest Rankin on Tuesday. They’re limping into the playoffs having lost six of their last seven games, although a couple of those were in close games.

Last Friday, for example, the Lady Vikes lost to Pearl in an overtime shootout. They had two other losses this season by one goal. The inconsistency is a bit frustrating, Lawrence said, but the good moments have shown there is plenty of potential.

Bouncing back from Tuesday’s loss will also be a mental hurdle. Northwest Rankin (16-1-4, 5-0) took 19 shots and scored eight goals in an 18-minute span of the first half. K.K. Morris had two goals, Zoey Brown had a goal and two assists, and seven players scored in all.

Warren Central keeper Haleigh Simmons made seven saves, but had little chance against a relentless onslaught of shots created by a porous defense in front of her.

“We played so much better against Pearl on Friday. And I think that’s part of it. In the girls’ minds, they worked so hard, and honestly they may be a little fatigued,” Lawrence said. “This one … it is what it is. Northwest Rankin is always tough. It almost doesn’t matter what you do, if you don’t come in playing at 100 percent you’re not going to compete — and we didn’t compete.”

Another off-field challenge the Lady Vikes will face against St. Martin (8-5-2) is handling the do-or-die environment of the playoffs. This is the team’s first postseason appearance since the 2018-19 season, so few if any of the players have experienced it.

Managing the four-hour trip to the Coast and the jitters will be a job unto itself, Lawrence said.

“That is going to be the big thing to tackle. I’m hoping we can get there a few hours ahead of time so we can get on the field early and move the ball around a little bit. Just get them comfortable after being on the bus, and motivated to be there,” Lawrence said. “That’s always the hardest part, I think. It’s not the competition, it’s beating that bus ride.”