Until last week, James Judge’s biggest contribution to Warren Central’s offense was delivering play calls from the sideline to the huddle.

And coach Robert Morgan got the message.

“He’s been upset that he hasn’t been getting the ball, and if he wasn’t, I’d be upset with him,” Morgan said. “That was his chance game, and he made the most of it. That’s what we’ve been looking for.”

Tonight, the Vikings look to continue working on what has been their most glaring weakness, the passing game or, more specifically, the catching game against Greenville (3-4, 1-2).

“We’ve got a better football team than Greenville and we should beat them,” Morgan said.

“Now if they get going, they could be a problem,” he said, noting that the Hornets beat Greenwood and played Clarksdale close before the No. 6 Wildcats pulled away, 34-14.

Morgan hopes his team can get ahead of the Hornets, then work on problem areas.

“We still want to get better at everything,” Morgan said.

He said the support of the large WC crowd and staying in the Top 10 helped their feelings a little bit.

With Judge practicing as a starter, the Vikings spent extra time at the beginning of Wednesday’s drills working on route running and catching.

“I had been … working hard in practice all year and I was getting frustrated,” said Judge, who had only one catch in the first five games.

That was the only ball that came his way until Friday, he said.

Trailing 14-0, Brett Morgan connected with him for a 17-yard gain on fourth-and-9 midway through the third quarter to keep WC’s first touchdown drive alive.

“I was thinking I’ve got to get this first down or I won’t get any more chances,’ ” Judge recalled.

He did get more chances.

With just over a minute remaining in the game, Judge slid though the end zone as he caught a 17-yard strike on a crossing pattern to make it a three-point game. Four plays earlier, he had fought his way through defenders for a 15-yard gain.

Judge got so much action because Kacy Jones, the leading receiver in the county with 12 catches for 203 yards, was out of town and missed the game.

Judge’s number wasn’t called in the huddle on the touchdown play, but when Morgan spotted a linebacker covering the quick-footed flanker, he changed the play at the line of scrimmage.

“My eyes lit up when he audibled,” said Judge, who wants to play at the collegiate or junior college level. “Doing that against the defending state champs in front of a bunch of scouts may have helped.”

Junior Joel Greer also had a big catch-and-run on WC’s final touchdown drive at Madison. That was his first reception.

“We both thought it was time for us to get the ball,” he said. “Maybe that game opened the door for both of us.” 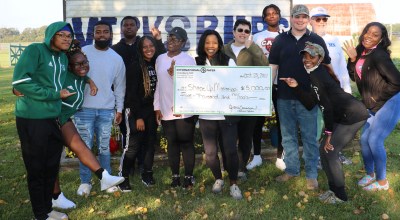