[01/14/02]The largest class in the history of the Mississippi Sports Hall of Fame will be inducted in Vicksburg this spring.

The class of seven, which includes Culkin native Glynn Griffing and former Hinds Community College star Earl Leggett, will be honored at the organization’s 40th annual awards banquet at the Vicksburg Convention Center on April 19.

“That will be a real treat,” Griffing said in August, when it was announced he had been voted in. “A lot of old high school teammates and family will probably be there.”

“Vicksburg has a great tradition of sponsoring events, like the (Miss Mississippi) pageant,” Sowell said. “The facility has more seats than anywhere we’ve had it … Once we came here, we didn’t visit anywhere else.”

The banquet has never been anywhere except Jackson.

“This is an experiment,” Sowell said. “If people respond, we’ll have it here more often.”

Added Quigley: “We want people to realize this is a Mississippi event, not a Jackson event.”

There will also be a golf tournament here in conjunction with the ceremony.

“Vicksburg has so many attractions,” Sowell said. “We want people to spend the weekend here.”

Griffing first gained fame at Culkin Academy, where he went 26-4, then quarterbacked Ole Miss to the national championship in 1962. He was 10-0 in his senior seasons at Culkin and Ole Miss.

Griffing was MVP of the 1963 Sugar Bowl, then went on to play for the New York Giants. He and Leggett crossed paths in the NFL championship game that year.

The Giants lost to Chicago, which featured Leggett and the rest of the famed “Monsters of the Midway,” 14-10. Leggett, a Juco All-American at Hinds, was a member of the 1954 “Little Rose Bowl” championship team before going on to LSU. After concluding his 12-year playing career in New Orleans, he went on to coach in three Super Bowls two with Oakland, one with Denver. The Palatka, Fla., native now resides in Raymond.

Ellis and Biggs are being inducted posthumously. 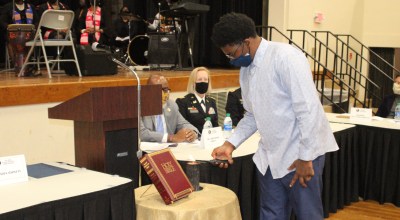