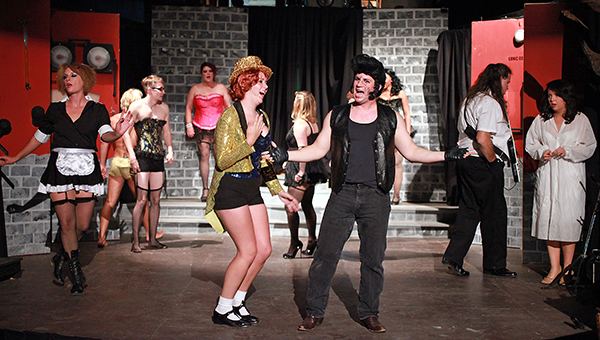 Eyebrows will undoubtedly raise for some when they hear that a local theater is performing a show involving transvestites, but for others the production of the musical that has a worldwide cult following means a fun-filled evening where audience members get to become as much a part of the show as the cast members.

Written by Richard O’Brien, the “Rocky Horror Show,” a spoof and tribute to the science fiction and horror B movies of the late 1940’s through the early 1970’s, has become an annual production for the Westside Theater Foundation. Local performances opened this past weekend with two showings of the musical, and two more shows are scheduled this week including a midnight showing on Halloween, said Jack Burns.

Burns, who is the founder of the foundation and is co-directing the musical, said this is the fifth year the group has offered the “Rocky Horror Show.”

“We have terrific talent for the show,” said Burns. The show includes veteran performers and new faces allowing annual performances to have a “happy difference,” he said.

“The show is the same, but when all the people involved bring themselves to the roles of the character, something new happens,” he said, and added, “We are not trying to recreate the play or the movie. We are putting our stamp on it. This is our show,” he said.

The musical begins when movie theater usherette, Trixie, walking down the aisle of the cinema singing “Science Fiction/Double Feature,” a song that gives spectators a synopsis of the “film” they are about the see.

Trixie is played by local Stacie Schrader, who said she has been involved with all five of the Vicksburg productions of the “Rocky Horror Show.”

“I’ve done the show for four years, and the year I didn’t perform I helped with the directing,” said Schrader.

Absent from performing last year, Schrader said she decided she wanted to get back on stage.

Typical of the antiquated horror flicks and following Schrader’s song, the audience is introduced to Brad and Janet, a straight-laced couple played by Alex Hill and Carolyn Gent, respectively, who, after becoming engaged, set out on a little drive to meet up with one of their former professors.

When the weather gets bad, the couple’s car breaks down, and guess what? They wind up knocking on a castle door, but holy cow. Unlike the typical cast of characters that slink around in the halls and corridors of scary shows, Brad and Janet are met by a motley crew and become thrust into singing and dancing with the group to the show’s signature dance number, the “Time Warp.”

Like Schrader, Brian Sessums says he’s been involved with the “Rocky Horror Show” since the foundation first started performing it in the Coral Room at the Vicksburg.

“You get to meet new people, and it’s something to do in Vicksburg.”

Sessums credits his father for becoming involved with the show.

“It was Dad’s idea. He said, ‘Get involved with the chamber, or do a play.’” Sessums said, and since he claims he has a “goofy personality,” performing on stage was a better fit.

This year, local performances of the “Rocky Horror Show” are being held at the Strand Theatre, 717 Clay St. Shows will resume at 7:30 p.m. Thursday and 11:55 Friday. Frida’s show is sold out.Tickets are $15. Prior to Friday night’s showing the 1960 American horror film “The Fall of the House of Usher” will be shown at 8 p.m. The film was listed with the United States National Film Registry in 2005, and features Vincent Price, Myrna Fahey, Mark Damon and Harry Ellerbe. Admission to the movie is $10, and tickets for the live performances and the movie are available at the theatre or at the Highway 61 Coffeehouse, 1101 Washington St.