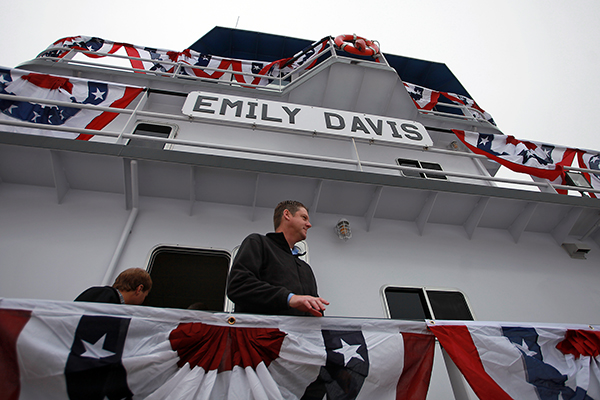 Traditions old and new merged Tuesday at the Port of Vicksburg as Magnolia Marine Transport’s most recently built motor vessel was christened.

Completed last January, the MV Emily Davis was made official not with old-world champagne but with the cue of a sea chaplain and blessed with two jugs of motor oil. A new tradition — keeping push-boats as busy as possible on the Mississippi River and its tributaries — kept the spit-shined vessel working until Tuesday’s formal dedication.

“We’re naming this series of boats after great-granddaughters, and she is a great-granddaughter to Les Lampton of Ergon,” said Stan Humphreys, president of Magnolia Marine, during comments welcoming the 21st boat to the largest inland waterways petroleum transportation fleet in the U.S.

Davis, 3, spent the ceremony nestled in the lap of her father, Barton, or perched atop his shoulders with the certificate bearing notice of the ship’s christening.

“Both Emily and this new boat are just getting started in this world — on the river of life and the river of commerce. They’ll experience good-weather days and stormy days.”

At 110 feet in length and 32 feet wide, the Emily Davis is the same size and horsepower as the fleet’s Kathy Azlin and Ann Elise. Living quarters for the boat’s eight-man crew feature bunk beds and workstations powered by a pair of 99-kilowatt generators. In the wheelhouse, captain Rick Osborne has the industry’s latest technology at his fingertips to monitor traffic on the river — the Boatracs system, which displays a digital map of the river and other barges. 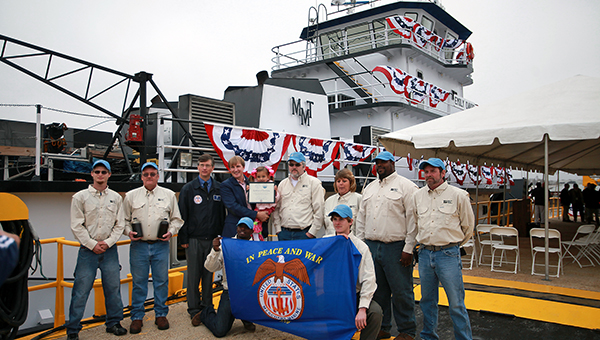 A FAMILY TRADITION: Emily Davis, 3, center, poses with the crew of the MV Emily Davis and others after the boat’s christening Tuesday morning at Magnolia Marine Transport.

“This keeps them from lying to ya,” Osborne said.

A 22nd vessel for MMT, the Margaret Ann, is expected to be finished by early February, with a formal christening to be determined later, Humphreys said.

The Rev. Michael Nation, chaplain of the Seamen’s Church Institute and a former pastor at Church of the Holy Trinity, Episcopal, in Vicksburg, performed the blessing on the boat, did the same to the motor oil that was to go into the engine itself and presented the flag of the U.S. Merchant Marine to Humphreys.

“A majority of the merchant marines in this country in 2014 are groundwater towing vessels such as the MV Emily Davis, or the on-shore vessels,” Nation said. “There are very few traditional ships as we once knew them, such as those that protected the convoys that went across in World War II.”

“She will leave with three empty oil barges and head to the Phillips 66 refinery at Wood River, Ill., just across the river from St. Louis, loading cargo, then heading to the New Orleans area,” he said.

Stages on the river around 13 feet in Vicksburg don’t necessarily mean trouble for pilots, Humphreys said, but perhaps just a little more attention around curves.

“It’s getting to the low point, but it’s fine right now,” he said. “It’s falling, but if you stay between the buoys, you’re fine.”

Magnolia Marine was formed in 1968 as one of the original group of companies that incorporated under the Ergon umbrella. MMT counts more than 75 barges among its fleet, in addition to the 21 boats.