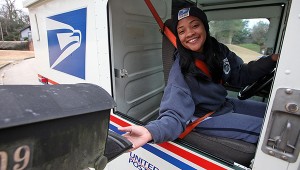 Mail carrier Charlie Harriod, who has worked with the U.S. Postal Service for about a year, delivers mail Wednesday on McAuley Drive. (Justin Sellers/The Vicksburg Post)

The U.S. Postal Service might not claim an official motto, but the little lady from Fayette whose friends call Charlie makes sure the elements don’t stop her from her appointed rounds.

“If it’s freezing cold, you just have to be dressed for the weather,” Charneshia Harriod said as a busy shift on the mail route in Vicksburg ended. “Being cute won’t cut it. It’s about long undergarments.”

Harriod, 29, is at the end of what’s essentially the end of her rookie year as a mail carrier. What she’s seen after enduring the coldest and hottest seasons outdoors for delivering letters and packages of all types has added mightily to her resume of experiences in the working world.

“The kids — they love to run out and get the mail. It’s about who’s going to get the magazine or the regular mail,” Harriod said. “They ask me a lot for rubber bands, for some reason.”

A Fayette native, Harriod found herself a year ago needing more than just employment before restarting school.

“I was looking for stability and a career,” said Harriod, who found and tested for the job following a search of the postal service’s website. “I knew I could find it there.”

She’s a sorter once her day begins at 7:30 a.m., as pieces of mail arriving from the postal hub in Jackson is prepared for delivery in Vicksburg. Once behind the wheel, she can end up anywhere in the city.

“I’m everywhere,” Harriod said. “One day, I might be on Indiana. The next day, I could be in the Bottom. When I walk, it’s most of Short Cherry, off Division, along Oak Street, Washington, near the casinos.”

Hitting each mailbox in town carries the usual risks, mainly from man’s best friend, she said.

“Any time we’re uncomfortable, or don’t feel safe, we don’t have to go there,” she said. “We can leave a notice or bring the mail back the next day.” We do have some carriers not afraid of dogs, and they go on through there.”

Winter’s end means the long underwear can be left at home, but not the weather gear. The extra layers simply give way to a bottle of water or two in the truck during deliveries.

“When I first started, I was on the rural side and doing a lot of driving,” she said. “So, it was okay because I was inside the vehicle 90 percent of the time. In the summer, it was extremely hot. I got so hot, the trainer said, ‘You’re turning red’. We had a gallon of water, and he just said not to drink it too fast. I learned it helps to be hydrated when you’re working out in the heat like that.”

Harriod wants to return to Jackson State University this year to finish a degree plan. For now, her work of bringing the mail on time will be mixed with a little play for the small-town girl at heart.

“Traffic is definitely different,” she said. “Someone else coming here, it’s probably nothing to them. But, I’m from a small area. Being in traffic is hectic. They have more shopping, more stores and more places to eat. So, it’s very different.”