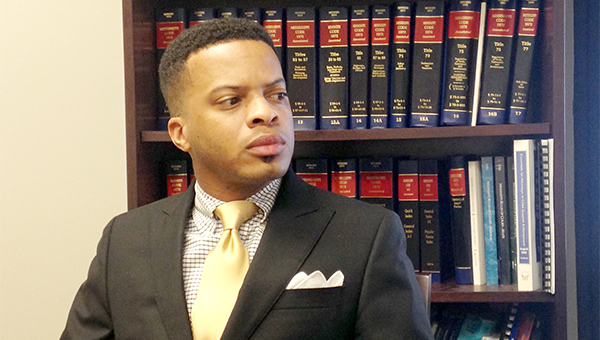 JACKSON — Elliot Flaggs grew up roaming the halls of the Capitol as the son of one of the state’s most respected African-American lawmakers.

At 29, he still walks the historic halls on High Street, but now he wears a business suit and tie and is arguably one of the most influential young black men in the state.

The Vicksburg High School graduate is the legislative liaison for the Mississippi Attorney General’s office. In his role, he works closely with legislators and the lieutenant governor’s office in pushing for legislation “that protects our state’s citizens,” he said.

“Being able to walk the halls of the Capitol growing up and becoming good friend with several legislators as a kid, I see the importance of that now,” Flaggs said.

Flaggs also gets to roam the halls of the state’s historic courthouses as head of the Child Desertion Unit for the AG’s Office.

“I prosecute deadbeat parents throughout the state,” Flaggs said. “We work with the most egregious cases.”

“I believe he could be the Governor of the State of Mississippi. I believe he has that potential. He’s smarter than I’ll ever be,” Mayor Flaggs said. “He got his smartness from me and his good looks from his mama.”

The younger Flaggs wouldn’t say if he planned to one day follow in his father’s footsteps as a lawmaker. For now, working as a legislative liaison and prosecutor is enough.

“I’m happily employed. No one can predict the future either. Only God knows,” Flaggs said.

Law and politics weren’t something he planned on anyway.

Flaggs graduated Vicksburg High School in 2003 — he describes himself as ‘a Gator for life” — and got a degree in industrial engineering from Mississippi State University. During an engineering internship, he decided the field wasn’t for him, so he applied for and was accepted to an internship with the Congressional Black Caucasus Foundation.

During the internship, he worked in the Washington, D.C., office of U.S. Rep. G.K. Butterfield, D-N.C. There, he fell in love with politics and law.

“It’s by far one of the most intriguing processes in the world,” Flaggs said. “It was rubbing hands with history. The experience I got was invaluable.”

After the internship, Flaggs began an internship at the Attorney General’s Office before going to law school at Ole Miss. Upon completing law school and passing the bar exam, Flaggs began working in the AG’s office and moved into his current positions in late 2013.

His passion for the political process hasn’t wavered, either.

“My political activism is becoming involved in the community,” Flaggs said.

Flaggs and several people from the Jackson area have formed Life Enhancement and Achievement Program, which is waiting for its nonprofit status from the Internal Revenue Service.

“Our plan is to bring a First Tee organization to Central Mississippi, which will encompass Vicksburg,” he said.

First Tee is designed to introduce underprivileged youth ages 5 to 17 to golf. The organization started in 1997 and is supported by the PGA, the LPGA

“A lot of the characteristics that fit golf, which is the gentleman’s game, translate into life,” he said. “If you can instill these traits in them at that age and allow them to find out about themselves and become better people, I am a firm believer that it will reduce teen crime.”

Flaggs and his wife, Dr. Brittany T. Flaggs, live in Madison, but his hometown is still a regular stop and is always on his mind.

“I tell everybody wherever I go that I was born and raised in the great city of Vicksburg,” he said.

Ortiz’s record in RTH has stood the test of time

I’ve always been fascinated by sports records that stand the test of time. Some, like Cy Young’s 511 wins, will... read more