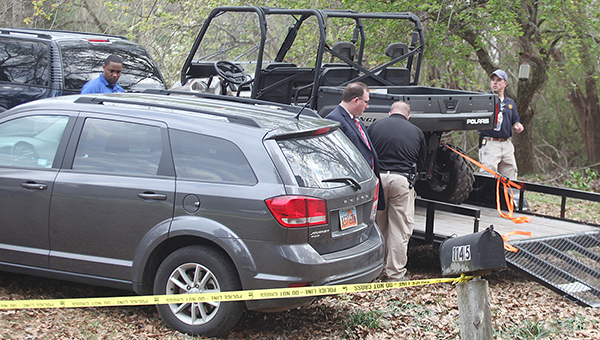 Officials with the FBI and the Mississippi Bureau of Investigation pack up their gear following Thursday’s investigation on Rodney Road, where the body of Otis James Byrd, 54, was found hanging from a tree. The FBI has take over as the lead agency in the death investigation. — Josh Edwards | The Vicksburg Post

PORT GIBSON — The body of a man reported missing since early March has been found hanging from a tree in a wooded area west of Port Gibson, Claiborne County Sheriff Marvin Lucas has confirmed.

The body, believed to be that of Otis James Byrd, 54, has been turned over to the Mississippi State Crime Lab for an autopsy, Lucas said Thursday. The FBI is leading the death investigation. 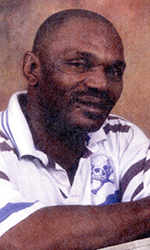 A Mississippi Department of Wildlife, Fisheries and Parks game warden, who had been called in to help with the search for Byrd, discovered the body behind the house Byrd rented at 1091 Rodney Road just outside Port Gibson.

“He was hanging from a tree,” FBI Special Agent Jason Pack said. “We’re trying to determine whether it’s a suicide or it was a homicide, and that’s where we’re at right now.”

Pack said the body would be taken to the state crime lab for autopsy to determine the cause of death.

The body appeared to have been hanging in the tree “for some time,” Jim Walker, a spokesman for MDWFP said.

Witnesses described the body as hanging from the tree by a sheet, approximately three feet off the ground.

John Baker, who owns the property where the body was found, said Lucas came to his house Thursday morning asking for access to the property that stretches back behind the house where Byrd lived.

Byrd was reportedly last seen when a friend dropped him off at Riverwalk Casino, Vicksburg Police Chief Walter Armstrong said.

The family had not seen Byrd since March 2. Authorities reported Byrd was last seen on March 8.

Byrd was convicted of capital murder in 1980 in Claiborne County in the slaying of 51-year-old Elizabeth Trim. Prosecutors at the time said Byrd killed her and stole $101 cash from her in order to pay $10 restitution he owed from a previous crime. He was sentenced in 1980 and paroled in 2006, according to the Mississippi Department of Corrections.

Read more in Friday’s edition of The Vicksburg Post.