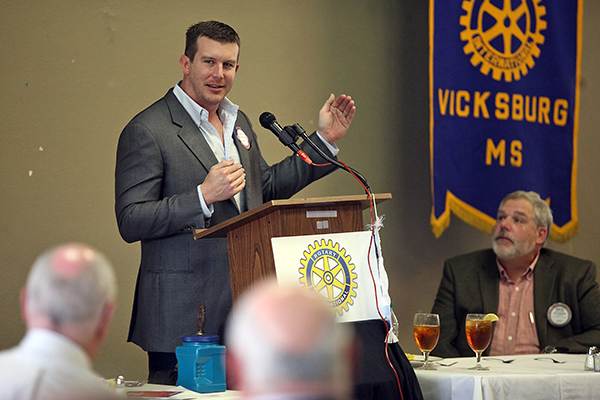 “The dream is free, but the journey is not,” Ted DiBiase Jr. told the Vicksburg Rotary Club Thursday.

The quote is one of DiBiase’s favorites and belongs to John Maxwell, an author and pastor.

DiBiase was raised in Clinton, and graduated from Clinton High School in 2001. He was the football team’s starting quarterback.

After high school he enrolled at Mississippi College where he played football and soccer. He graduated from MC in 2005.

DiBiase said he really fell in love with God during college and he wanted to become like the heroes of faith in Hebrews 11.

“At MC, that’s where it became a reality for me,” he said. “I began praying for God to send me to the darkest place in the world so I can show you much I love you. Let me serve you,” DiBiase said.

He thought the darkest place in the world would be some far-flung country on another continent where he didn’t speak the language and his life would be threatened everyday.

“What I didn’t realize is that when I gave up all my dreams and said God whatever you want for me, that’s when he gave me my childhood dream,” DiBiase said. “At the same time he answered my prayer and sent me to the darkest place in the world, which is the entertainment industry.”

According to DiBiase the entertainment industry has fame, fortune, power and influence and your need for something greater becomes less.

DiBiase’s dream was to become a professional wrestler like his father “The Million Dollar Man” Ted DiBiase Sr..

“I wanted it bad and I believed in my heart that’s where God wanted me to be.”

DiBiase’s father tried to persuade his son from becoming a wrestler. He convinced his father that he wanted to be just like his hero, “The Million Dollar Man.”

DiBiase didn’t expect it to be easy, but soon learned the journey to become a professional was a lot of hard work.

“It was far harder than I ever imagined,” DiBiase said.

He worked his way through the developmental leagues of wrestling before finally signing a contract with World Wrestling Entertainment in 2007.

He was very good and had a promising career going in WWE.

He’s wrestled in front of millions and in a WWE Wrestle Mania match in front of 80,000 people live, and soon learned that the more famous and rich you are, the more free stuff people give you.

“There was a time in my career that I forgot what got me there, and I lost sight of my priorities, and my priorities shifted,” DiBiase said. “All of a sudden I couldn’t make enough money, I couldn’t become famous enough, and I wanted more.

“I woke up one day and I hated the person I saw, because I had this moment staring in the mirror where I hated that guy.”

“The Lord led me to 1 John 2:15 which says ‘Do not love the world or anything in the world for if you do, the love of the Father is not in you.’”

That moment was a turning point in his life.

He had fallen in love with the famous lifestyle and some things happened in his life he’s not proud of, and someday he’ll have to explain them to his kid.

He walked away from WWE on Sept. 1, 2013 and has been living by faith ever since.

“I left WWE without real security, and know that I serve a big God,” DiBiase said. “It’s been the hardest, most trying, most amazing year or so of my life. I’ve grown as a man, as a father and as a husband.”

DiBiase has been working with Dan and Hunter Fordice’s Warrior Bonfire Project to help heal wounded veterans. He spoke of his respect for those who have served their country and sacrificed so he could have the life he lived.

Now he’s dedicated to giving back and helping anyway he can. As he finished his speech to the Rotary Club, he received a standing ovation and grown men wept.